On 22nd March 2017, an attack on Westminster left over 50 people injured and killed five others. Khalid Masood, the attacker, was also killed in the attack, and the classification of the attack as terrorism again raised the question as to whether Islam was responsible for or encouraged terrorist attacks. In the days that followed, Londoners mourned together in a series of vigils. Here, we present personal reflections of Londoners who attended the vigils in solidarity with the victims and their fellow citizens.

My name is Mustafa Siddiqi and I had the privilege of attending the vigil held on 29th March 2017 in honour of the victims of the barbaric Westminster attacks. It really was uplifting be surrounded by hundreds of Ahmadi Muslims, as well as countless other people from all corners of society, standing in unison in honour of the victims of the attack and in defiance of its perpetrators.

My motivation – broadly speaking – for attending the vigil was twofold. Firstly, I wanted to be present as a way of paying my respects to the victims and offering my condolences to their families. Just as if there’s a death among my friends or family and I’d always try to be there to offer love and support, it hurts in the same way if fellow citizens of our country lose their lives – and so I felt duty-bound to be there.

But perhaps even more significantly, my other reason for being there was my attempt to send out an extremely loud and clear message. The goal of terrorism – even more than the ending of innocent lives – is to inspire terror and fear in the hearts of those the victims leave behind. Attending the vigil was, for me and everyone else present, a show of defiance: that as citizens of this beautifully cosmopolitan and welcoming city, London, we refused to back down or cower in front of the actions of such cowards. It was a message that every attempt to attack our social peace and harmony will find us increasing in resistance against those who try to divide us.

I was asked to record a short video summarising my feelings before the vigil itself – I ended up recording it walking between stations on the Underground! After the vigil was over and I returned home, I found that the video had gained a fair amount of attention, even being picked up by the Huffington Post! I was also honoured to receive messages of support afterwards from Muslims and non-Muslims alike. It was an honour and blessing if the video positively contributed at all – I personally claim no credit as I was without doubt only giving expression to what the hundreds of others with me at the vigil were feeling that day.

I was also sporting the now-iconic, blue ‘I’m a Muslim, ask me anything’ T-shirt, along with many others. In fact, it almost became a sort of uniform and the impression I had was that it was particularly useful for those attending the vigil who might have been wondering whether there was a connection between Islam and the actions committed in its name. The T-shirts, in a way, made those of us wearing them appear as go-to help guides for people wanting to ask about Islam and the attacks: for people wanting reassurance, who wanted their fears allayed and their misconceptions corrected. In this way, beyond just attending the vigil, the Ahmadiyya Muslim Community tried to be a positive presence there, actively working to promote openness and understanding against a climate of widespread misunderstanding existing paradoxically in an age of unprecedented mass-communication.

Abdul Quddus Arif is a teacher at the training seminary for future missionaries for the Ahmadiyya Muslim Community. In this interview he reflects on the attack and the vigil.

When the attack happened what were your initial thoughts?

When witnessing the terrorist attack unfolding on Westminster Bridge, my initial hope and desire was for this perpetrator not to be Muslim, however, deep inside I knew that what I was seeing on the TV screen was going to turn out to be a so-called Muslim committing heinous crimes against humanity in the name of Islam. The authorities had warned that a terrorist attack was imminent in the UK, but nothing can prepare one to see such an atrocity in one’s own home city and backyard.

Why did you think it was important to go?

As a British Muslim, my thought was ‘Not in my Name’. I could not bear to present an apologist version of Islam, and I thought my reaction should be one of taking a negative situation and using it to promote the positive teachings of Islam. So to show solidarity with other Londoners was paramount and what better way than to go to the vigil, as this attack had left a deep impact on me, just like others.

What was the reason behind the #iammuslim t-shirts?

We wanted to make ourselves visible in the crowd, and not be apologetic about being Muslims. We thought that we need to send a message to the public that whatever ideology the perpetrator may follow, it had nothing to do with the true teachings of Islam, the Holy Qur’an and the example of the Holy Prophetsa.

More often than not, Allah sows an idea in our heads that proves to be of such success that one is left perplexed as to how one came to such an idea in the first place. The same can be said regarding the #iammuslim T shirts. I recall Farhad (Press Secretary for the Ahmadiyya Muslim Community) calling me and inquiring for AMYA branded t-shirts or hoodies but it turned out that there was nothing left in AMYA’s stock.

However, just before leaving for the vigil we remembered that The Review of Religions had these t-shirts in their stock during ijtema (annual gathering for Muslim youth). So we called the office and by God’s grace they had these in stock. So we requested to take 10-12 t-shirts, hoping they would not seem too out of place during the vigil.

What was the response from the members of the public?

The public’s response was unbelievable. From the moment we arrived for the vigil, all attention from the public and media was on us. The t-shirts proved to be a hit! Nearly every person that approached us had something positive to say, and most importantly they echoed our sentiments that such an act had nothing to do with the teachings of Islam. If they were not tapping us on the shoulder, shaking our hand, they were engaging in dialogue and conversation. 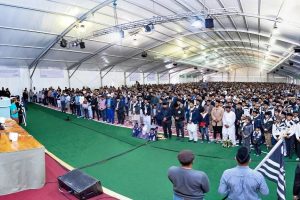 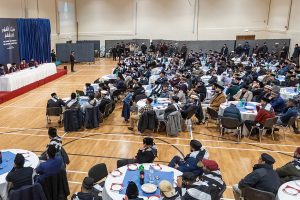 Honesty, Dedication and Righteousness – Role of an Office Bearer 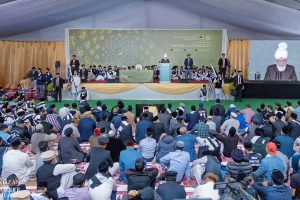