In Conversation with Carla Power – Part 2

The author of if the oceans were ink sits down to speak to the review of religions.

In last month’s issue of The Review of Religions, we published the first part of our interview with Carla Power, author of If the Oceans Were Ink, her recounting of a year spent studying the Holy Qur’an with her friend, Sheikh Mohammad Akram Nadwi. In part 1, Power discussed misconceptions about Muslim women and touched a little on the reasons why Islamic jurisprudence has become more rigid and hidebound than in the past.

In part 2, we continue our discussion with Power, starting with her perspective on the ‘traditional’ Muslim woman:

The prevailing – and highly politicised, I would add – notion of what makes a traditional Muslim woman:  it depends on who you ask. There’s a construction, certainly in many mainstream western accounts, of the traditional Muslim woman being muffled and silent and confined to the home, and the fascinating thing about witnessing shakeouts from [the] rediscovery of this tradition of Muslim women scholars – who, of course, had many more freedoms than many women in many Muslim societies today – was to see that the notion of a traditional Muslim woman has been, shall we say, recreated by all sorts of patriarchies and all sorts of political agendas, and it serves all sorts of purposes. In the run-up to the invasion of Afghanistan and the invasion of Iraq by the United States, saving the Muslim woman was a leitmotif and [the thinking was that] we have to free these women from their burqas. I remember this scene [where] many photographers ran together and I talked about it in the book. It’s the notion that when are the women of Kabul going to lift their burqas? There were photographers there with all sorts of pictures of women lifting their burqas, which makes for a dramatic picture. But also, the great irony is now, around 15 years later, they’re still in many ways forced to live ‘traditional lives’, in part because of the chaos.

You were raised in a half-Jewish household with an immersive interest in the Islamic world. As an external observer, what do you think Muslim women should be doing today to allay some of the common perceptions about Islam?

Oh, I would never! I would really get nervous about describing what Muslim women could do…I think they’re doing it already, which is fantastic. The question is whether we’re good enough listeners, whether the outside world is a good enough listener or understand[s] that liberations come in all shapes and sizes. You have to be mindful and sensitive to the fact that not all liberations look alike.

I remember giving talks right after [my] book came out, saying, ‘let’s do a thought experiment: can you imagine a woman in a hijab on the cover of Vogue or on the cover of Good Housekeeping?’ And of course since then, extraordinarily quickly, there has been a tipping point. Whether it’s Nadiya Hussain on the cover of Good Housekeeping here or a former Miss Minnesota getting on to the cover of a glossy magazine, there’s been a real culture melt. I get so excited when my teenage girl shows me Teen Vogue, which has some of the most sophisticated analysis of Muslim voices and Muslim women’s struggle, which says a lot. I think it’s a younger generation of editors and also in part it’s been honed against this ghastly official Islamophobic platform, certainly in the United States, where many people are so outraged at seeing the hatred and bile that this administration is managing to fling that on local levels I feel there is a real change.

As you were speaking of Nadiya Hussain coming on Good Housekeeping, I was thinking of the European Court of Justice’s headscarf ban in the workplace, which was a big blow to some people. Particularly single mothers, who need to work to fend for their families. There seem to be two very interesting currents here…

I think you’re absolutely right. I don’t mean to romanticise it by pointing to one or two magazine covers. I think the reality for women in hijab both in America and in Europe, both legally and on the street, in terms of fear, is real and growing, unfortunately. People are being forced to, sadly, in this polarised environment, take sides and that is a tragedy but the people who see the horrors of this…and maybe it’s just hunting around for silver linings, but I’ve been incredibly encouraged in the United States in seeing these strange new alliances come up where Jewish communities, seeing the hatred being unleashed on Muslims, [are] recalling their own histories…so there are new alliances and I think people are coming together.

In contemporary notions of freedom, people are almost alright with women being taken off the red carpet in Cannes because their heels weren’t long enough, without raising many eyebrows. But headscarves somehow do. You speak of the headscarf in your book and your exasperation is almost palpable where you say, ‘Why is it that the hijab seems to obsess non-Muslims so much?’ Can I ask you that – why is it that you think the hijab obsesses people so much?

I think it’s an advertising of two sorts of differences in that it’s both gender and [then] Joan Wallach Scott has made this point in terms of why it seems to rile the French so much. Her argument is [that] this kind of punctures the idea that we are all citoyens [citizens] together and that you have this private thing – the faith – that takes you out from the whole crowd. Within the French context – and I look to them as the radical secularists of our day – it punctures and advertises your femininity and it advertises your religiosity. But it’s [also] a double whammy – it’s both gender and faith and often ethnicity. So I think that that is one thing… and I also think [the] post-sexual revolution in the West, the idea of covering up, and not being sexually available, or signaling their sexual availability through sartorial choices, that is seen as edgy, as it were. It’s seen as countercultural and you’re not playing the game of how our society has defined its notion of freedom and that is signaling of another set of values and framework for freedom and that really rankles people and really riles people…seemingly… that’s my guess.

You speak of Hazrat [a term of respect that means honourable] Aishara and Hazrat Khadijahra and particularly Hazrat Aishara as exceptional for her time. She excelled men in many respects. She was a jurist of high distinction and taught as well. At the time, she had a very strong, powerful voice and in those days the medium was really word of mouth – how many people could gather around you in a circle. Imagine that Muslim women were trying to emulate Hazrat Aishara today; women who don headscarves and are trying to permeate the media spectrum to gain an audience. Today, you have the Internet and social media, and your voice resonates that much louder. I am interested in the medium itself. Do you think she would get that platform today? Would her voice be as strong and powerful in spite of her headscarf?

I would like to think that she would. If she were speaking as a Muslim woman, if she were speaking about topics related to Islam, I would argue that the headscarf, in the non-Muslim mind, would actually make her more authentic and that’s one thing that I would take issue with. I think that there are a lot of Muslim women, who if they decide not to cover, they resent the fact that they are seen as any less authoritative and Muslim than other women…

So, you are saying that the majority of the so-called ‘liberal camp’ would find Hazrat Aishara more authentic?

Yeah! Because she was wearing a headscarf, because that’s what they have been taught to see…if the force of her arguments were good. Against that, I have got to say, after this fall of revelations of institutional sexism across the board, we also know that women speaking out in public in any form, with a headscarf or without, have trouble making themselves heard because they are interrupted often. We saw [that] with Hillary Clinton’s campaign. She was deemed shrill and unlikeable but no one could fault her for the logic of her arguments. She was much better prepared than the other candidate but I think there is a disconnect and I can imagine that it’s even larger if there’s a woman in a hijab. I am not going to come down on either side. I think it is a fascinating question but it’s not one that I feel that I know but I think there are lots of things to look at there.

There has been discussion on how family legislation in the UK is archaic and in need of desperate reform – we still don’t have a no-fault divorce category for example, which is really alarming. Do we tend to castigate the Islamic framework of rights much more than focusing on the adoption of many fundamental freedoms that are still very new in the West as well, with many gaps still existing today?

Of course, and I think that was the one big thing that the Sheikh taught me is how constructive my own notions of liberty and of equality are. I think we have very short memories. I do. I think our knowledge of history isn’t that good [and that] there’s a hypocrisy at work there.

In terms of women’s rights, I find the equality model a fairly vexed notion. When we constantly compare women to men, are we not inferring that the male standard is the superior standard? Is it not a self-defeating argument that by continually comparing women to men, we exclude their own voice and their individuality?

I think you’re right. I remember my mum talking about this almost thirty years ago. It’s a really basic debate within feminism itself: do you want separatism or do you want to use men as the benchmark? I find increasingly that there are different needs and that there are different issues. The older I get, the more I recognise the differences. And yet, my hope for equal opportunity and equal access to power or lack thereof or to different forms of power, is equally distributed. So yeah, I do think there is a difference. I don’t think equality means not recognising difference; I’ve never taken it as that.

The views expressed in this article are personal opinion and do not necessarily represent the official views of The Review of Religions or the Ahmadiyya Muslim Community.

Ahmadiyyat • Back Issues • The Holy Qur'an

Back Issues • Islam • Science, Medicine and Technology • The Holy Qur'an 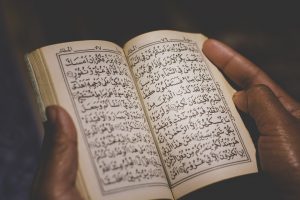 Introducing At-Tafsīr-ul-Kabīr: The Grand Exegesis
A Verse of The Holy Qur’an
Comment