The Mention of Bismillāh in Earlier Books

Some critics object that bismillāh, which Muslims are so proud of, can also be found in earlier scriptures. For instance, in the Zoroastrian scriptures, it is written:

[In the name of God, the Merciful, the Just][1] and then in later-day Persian, it has been translated as:

‘It is from Solomon, and it is: “In the name of Allah, the Gracious, the Merciful.”’

How, then, can it be true that the Muslims claim that the subject-matter of this verse had not been known to the world prior to the revelation of the Holy Qur’an? Islam does not claim that the subject matter of this verse is new.  The  words Allah, ar-Raḥmān and ar-Raḥīm already existed and were in use. Rather, Islam claims that the manner in which the Holy Qur’an has used them is unprecedented. If an opponent of Islam were to  provide evidence to the contrary, then his claim would certainly be worthy of consideration. But this is  impossible, since prior to the Holy Qur’an, no scripture claimed that each and every one of its words was from God Almighty; as such, no other divine scripture about which it can be said that every begins with this verse.

And if the objection is raised that it is common practice for people to begin their letters or writings with the name of Allah and His attributes as a way of invoking the blessings of Allah, then neither Islam nor Muslims deny this. If others wish to participate in this practise of the Muslims, they are absolutely free to do so.

As for the objection raised by Reverend Wherry,[5] one answer has already been given above. The second answer is that there is such a world of difference between the two expressions [i.e. the Persian and the Arabic] that only he who is ignorant of Arabic can assume that they are synonymous. The meaning of بخشائشگر [the Merciful] and دادار [the Just] is not even one-twentieth that of ar-Raḥmān and ar-Raḥīm (as will be shown from the exegesis of this chapter). However, I do not deny the eloquence of this Persian statement. Islam claims that prophets have previously been sent to all nations, and the verse:

[And there is no people to whom a Warner has not been sent.]

is a testimony to this. Hence, if there is a good phrase in the Zoroastrian scriptures, why would Muslims mind it? Rather, it  is Reverend Wherry and his fellow  Christians who would disapprove of this; those who act as if they are the custodians of the Grace of God Almighty and believe that no trace of prophethood and revelation can be found in any nation outside the Children of Israel. From the Islamic point of view, Zoroaster is a prophet of God and commands our everlasting respect. The source of his words is the same as that of the Qur’an. Thus, it is not surprising to find similarities or concord between them.

As has already been stated in the keyword analysis, some believe that the word ‘Allah’ is an ism mushtaqq [derived noun]. However, as has been proven therein, all these views are wrong and have been rejected by the leading grammarians of the Arabic language. For both Sībawayah and Khalīl hold the view that ‘Allah’ is a proper noun and is not derived from any other word.[7] The evidence provided for this by various scholars is the following:

(1) This word is not used for anyone besides Allah Almighty, to the extent that even the Arab pagans did not use it for any other deity. Had this word been constructed from al and ilāh or al and lāh, then just as these words were used for others, the word Allah would have been used for others as well. However, the Arabs never did this.

However, this is incorrect. It is not used here as an attribute. Rather, it is used as an ‘aṭf bayān [explanatory apposition]; in such instances, it is permissible to use a proper noun. As they say:

[This house belongs to the honourable, the learned, Zaid].

In such instances, the proper noun is used in order to remove confusion. The meaning of this verse is that the import of ‘the Mighty’ and ‘the Praiseworthy’ is, in fact, Allah.

Some are of the view that the verse:

[And He is Allah, the God, both in the heavens and in the earth]

shows that [Allah] is not a proper noun, but rather an attributive name. The reply to this is that when any name becomes well-known in conjunction with its attributes, then it begins to be used as an attribute. For instance, Ḥātim [an Arab poet from the 6th century known for his generosity] or Rustam [a central warrior in the Shahnameh, a Persian epic] are the names of two particular individuals; one has become famous for his generosity and the other for his bravery. Today, the name Ḥātim is used interchangeably with a generous person, while Rustam is used for a brave person. For example, someone can be referred to as Rustam while another is said to be Hatim. Similarly, since the word Allah and His attributes point towards a Perfect Being, therefore, one may say that Allah is He Who is in the heavens; that is, the name of the One Being Who is perfect in all His Attributes is Allah. There is nobody whose name or deeds can be associated with Him.

Some people assert that this word is in the measure of فَعَّال fa’al, meaning past tense  so it should be marked by a tanwīn, but since [10] tanwīn has not been used with it, this indicates that ‘al’ –ال [the definite article], at the start of this word, is not from among its root letters; rather, it is there to express definiteness. Therefore, it is a compound word.

The answer to the above objection is that there are exceptions to every rule. Since the tanwīn has not appeared on the word Allah, this also seems to be an exceptional case. Indeed, the proof for this is that if the vocative particle (یا) appears before the definite article (ال), the word ayyuhā (ایُّھا) is added after it. For instance, if one was to call out an-Nās [the people] (النَّاس), one would have to say ‘yā ayyuhan-Nās’ (یَا أَیُّھَا النَّاس); however, it would be incorrect to say ‘yā ayyuh-allāh’ (یَا أَیُّھَا اللہ) which is testimony to the fact that the ‘al’ in Allāh is part of the word, as opposed to being the definite article.

Some people also say that since the hamzah in the word ‘Allah’ is a hamzatul-waṣl [a connective hamzah][11], it is superfluous. Similarly, they further argue that when Allah is preceded by the letter Lām (ل) i.e. when we say للہ lillāh, the letter alif (ا) is dropped. This also proves that hamzah is not part of the word.

In short, the manner in which the word Allah has been used both prior to and during the advent of Islam, proves that it is a proper noun and is not derived from any other word. In view of some of its characteristics, the arguments that are given about it being a derived word are invalid. In fact, these arguments are proven wrong through other examples.

The Addition of ism in Bismillāh:

(1) Besides seeking help, the letter bā’ (ب) is also used for oaths. Had only ‘billāh’ [with Allah] been used, doubt may have arisen as to whether we are swearing an oath in God’s name. To remove this doubt, the word ism [name] has been added.

(3) Attention has also been drawn to the fact that there are blessings in the attributive names of Almighty Allah and thus man should pay attention to them.

(4) The Holy Qur’an is a closed treasure; in order to gain access to a secure house, a person must show its guards or inhabitants the permission or orders of the owner or give the owner’s reference. Hence, when the police enter anyone’s house, or seize anyone’s property, they declare that they are doing this in the name of the state. Similarly, the addition of the word ism [name] indicates that the person who begins the recitation of the Holy Qur’an with bismillāh, is as if saying to those angels who have been appointed for the service of the Holy Qur’an that, as God Almighty Has Himself commanded him to read this surah, thus, they should open for him the doors to the meanings of that sūrah. Then, very briefly, he frames this subject-matter as: ‘In the name of Allah, the Most Gracious, the Ever Merciful, I request that this treasure should be made accessible.’ It is evident that anyone who turns to the Holy Qur’an in this manner with the endorsement of God Almighty, would partake of its knowledge. However, anyone who turns to the Holy Qur’an without the endorsement and name of God, but rather, turns to it out of mischief and malice, such a person would not have access to its treasures.

(5) & (6) The fifth and sixth points of wisdom which are alluded to relate to the two prophecies mentioned in Deuteronomy, Chapter 18, verses 18 and 20, which I have already cited in reply to the question as to why bismillāh is repeated in the beginning of every sūrah; the wisdom being that it has been mentioned in these prophecies that ‘he [i.e. the Holy Prophet (sa)], invoking the name of God, will recite the Divine Word.’ Thus, to draw attention to these prophecies, it was necessary that the word ‘name’ should have been added here.

Serialisation will continue in the next edition.

[5] Reverend Wherry was a 19th-century Christian missionary who wrote on Islam.

[10] Tanwīn [nunation]is a diacritical symbol in the Arabic language which indicates that the word ends with a nasal sound. [Publishers]

[11] The connective hamzah is one which gets dropped during speech as it is not part of the word but is merely an addition. [Publishers] 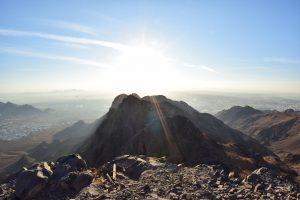 Absolute Obedience: Two Costly Mistakes by Muslims in the Battle of Uhud

Ahmadiyyat • The Companions of the Holy Prophet (sa)

A Sincere and Loyal Community

The Companions of the Holy Prophet (sa) • The Holy Qur'an

The Beauty and Glory of the Holy Qur’an