Wounded in the Battle of Ahzab

His Holiness (aba) quoted Hazrat Mirza Bashir Ahmad Sahib (ra) who writes that not many were martyred in the Battle of Ahzab, however Sa`d bin Mu`adh (ra) was quite fatally wounded. Though only a few people of the disbelievers were slain, they received a huge shock, which proved true a prophecy of the Holy Prophet (sa) which was that now, they will not have the courage to attack the Muslims

His Holiness (aba) said, it is narrated that the Holy Prophet (sa) had a tent erected near the mosque in which Hazrat Sa`d (ra) would be tended to, so that he could visit him. As his wound started to heal, Hazrat Sa`d prayed, ‘O God! I love nothing more than to fight in Your cause. It is my own belief that now You have ended our battles with the Quraish. If there are still to be fought against the Quraish then keep me alive so that I may serve Islam, but if our battles with them are done, then I am happy even if this wound opens and continues to bleed till my demise.’ That same night, the wound open and bled profusely. Ibn Abbas (ra) relates that when he began bleeding, the Holy Prophet (sa) went to him and held him close, to the point that Hazrat Sa`d’s (ra) blood came onto the beard of the Holy Prophet (sa). The Holy Prophet (sa) prayed, ‘Sa`d fought in Your cause, he proved the truthfulness of Your Prophet and fulfilled whatever was assigned to him, so accept his soul.’ When he still had a little life in him, Hazrat Sa`d (ra) opened his eyes and said, ‘Peace be on you O Messenger (sa) of Allah.’ To all the family members present at the time, the Holy Prophet (sa) said that ‘I pray for there to be just as many angels present at the time of Sa`d’s demise as there are people present now.’

His Holiness (aba) related that the death of Hazrat Sa`d (ra) was a great shock; he was regarded with the same respect among the Ansar (natives of Madinah) as Hazrat Abu Bakr (ra) was among the Muhajireen (migrants). His death was also a shock for the Holy Prophet (sa), but he displayed exemplary patience.

During his funeral procession, Hazrat Sa’d’s (ra) elderly mother loudly exclaimed in grief. The Prophet (sa) had taught against this and said that a woman who excessively wails, lies, except for Sa’d’s (ra) mother, for what she has said about him is true.

While carrying Hazrat Sa`d’s (ra) body to the grave, some companions expressed how light his body seemed. The Holy Prophet (sa) said that this was because angels were also carrying his body.

When consoling Hazrat Sa`d’s (ra) mother, the Holy Prophet (sa) said that ‘your son was the first person for whom God smiled and His throne was moved,’ i.e. to accept him in heaven with open arms.

His Holiness (aba) related a narration in which Hazrat Sa`d (ra) said ‘that even though I am weak, there are three things in which I am very regular and resolute; first, I have found whatever the Holy Prophet (sa) said to be true. Second, I have never allowed any other thought to enter my mind while offering prayer. Third, there is no funeral in which I have not taken part, and thought from the perspective of the deceased, as to what will be asked of him,’ i.e. he was very mindful of the hereafter

His Holiness (aba) said that the next companion who would be mentioned is Hazrat Sa`d bin Abi Waqas (ra). His father was Malik bin Wahaib and his mother was Hamna bint Sufyan. He was from the tribe Banu Zuhra of the Quraish. He was of the ten companions to whom the Holy Prophet (sa) gave the glad tiding of heaven. He was the last of these ten to pass away.

His Acceptance of Islam

His Holiness (aba) said regarding his acceptance of Islam, it is narrated that he saw a dream in which it was dark, then all of a sudden the moon rose, and he headed towards it. Along the way he saw that Hazrat Zaid bin Haritha (ra), Hazrat Ali (ra) and Hazrat Abu Bakr (ra) were also going in the same direction. He asked them when they had gotten there, to which they replied that they had just arrived.  By that point, he had heard of the Holy Prophet (sa) and the message he was propagating.  Thus he went to the Holy Prophet (sa) and accepted Islam.

It is narrated that he was either 17 or 19 years of age when he accepted Islam. He was of those who accepted Islam as a result of the preaching of Hazrat Abu Bakr (ra). He was successful in garnering the victory of Islam in Iraq during the time of Hazrat Umar (ra).

His Mother’s Reaction, and a Lesson of Obedience to Parents

‘And We have enjoined on man kindness to his parents; but if they strive to make thee associate that with Me of which thou hast no knowledge, then obey them not.’ (29:9)

His Holiness (aba) said that Hazrat Sa`d bin Abi Waqas (ra) was among those companions who endured the harshest conditions and persecution during the boycott of Muslims by the Meccans. He himself relates that one night he was walking when his foot touched something. His state of hunger was such, that he picked it up and ate it. He would say that to this day, the did not know what he ate..

His Holiness (aba) said that he would continue mention of Hazrat Sa`d bin Abi Waqas (ra) in the following Sermon.

His Holiness (aba) said that he would be offering the funeral prayer in absentia of the following members:

Master Abud Sami Khan Sahib who passed away on 6 July 2020. His grandfather had the honor of accepting Ahmadiyyat at the blessed hand of the Promised Messiah (as) in 1903.He was a teacher and also served as the Headmaster of Ta`limul Islam High School Rabwah. His Holiness (aba) said that he had also been his student, and commended him for his excellent style of teaching and the great kindness and care with which he taught. His Holiness (aba) prayed that may Allah always keep his progeny attached to the Jama`at and Khilafat

His Holiness (aba) said that he would also offer the funeral prayer of Rana Naeemuddin Sahib, whose mention had been made earlier but his funeral prayer could not be offered and would be included with the two mentioned above. He prayed that may Allah shower them all with His mercy. 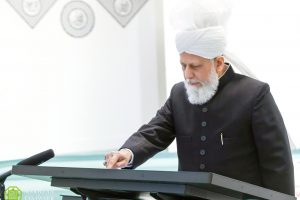 Islamic History • The Companions of the Holy Prophet (sa)