The great faiths of the world have a religious text to refer to, and yet, our observance of religious people is often that their behaviour does not reflect their teachings and faith. Those taught to show love and turn the other cheek are sometimes found waging wars, yet their religion teaches the opposite. But it is also noticeable that the major world religions all seem to originate from the Middle East and South East Asia.

For the continent of Africa, were those people devoid of religion until the Abrahamic faiths came to the continent in the last two millennia, or were they also the beneficiaries of revelation which would have impacted their cultures and behaviours?

The Holy Qur’an mentions that all tribes (including those across Africa) have received revelation and prophets:

‘And for every people there is a Messenger. So when their Messenger comes, it is judged between them with equity, and they are not wronged.’ [1]

There is also a Hadith [4] saying of the Holy Prophet (sa)] recording a conversation in which Prophet  Muhammad (sa) when asked how many Prophets had been sent to mankind, answered that there were 124,000!

It is inconceivable that if ‘every people’ received Messengers from God, that this would not include all of the different tribes across Africa. Although Africa is represented as countries through the political and colonial influences of the last century, in fact there are many more distinct tribes in Africa, many stretching across multiple country boundaries. Eliade mentioned that around 800 languages are spoken on the continent [5].

There must have been many Messengers that we are not aware of, but whose legacy would be imprinted in the changes in behaviour and culture resulting from their teachings. Sometimes this will also be manifested in a move to towns with communal responsibility and shared worship from traditional pastoral herders who would have moved across the region just as the Tuareg do to this day.

Traditional African religion has common themes such as a Creator or High God, positive ancestor influences as well as tricksters, and an afterlife with spirit worlds.

There are hundreds of major tribes across Africa with their own languages and distinct cultures, but broadly they are grouped into the following families:

The locations of the various tribes are shown in the following map:

Across African tribes, there is a recurring theme of an ultimate superior Creator in the heavens, as illustrated through the following proverbs and prayers passed down:

‘Nzame (God) is on high, man is on the earth’, Fang Tradition (Gabon)

‘God, you are in the heavens, you are the only one’, Anuak Prayer (Sudan)

‘The earth is wide, but God is the elder’, Akan Proverb (Ghana)

These proverbs show an understanding of a superior Creator who is also on a different physical plane to mankind, often depicted as being in the heavens. Sometimes tribes refer to lots of deities especially from an animist perspective, but they almost always recognise a High God or Creator. The tribes across Africa have various names for the High God such as Maa for the Bambara, Irke for the Songhey or Amma for the Dogun (Velton, p.31). There is also a common theme of the High God having created the world, and then withdrawn to allow humans to work and flourish, but also to suffer illness and misfortune. An example is among the Dinka tribe in South Sudan (Enc. Britannica 2020).

Understanding the Creator is intrinsic in mankind, and not learned, as the following Ghanaian proverb highlights:

‘God needs no pointing out to a child’, Akan Proverb (Ghana)

Then there is the characteristic of the Creator being omnipresent and seeing all of our actions and thoughts:

‘God has nothing hid from him’, Ovambo Proverb (Angola)

‘The sun shines and sends its burning rays down upon us, the moon rises in its glory. Rain will come and again the sun will shine, and over it all passes the eyes of God. Nothing is hidden from Him. Whether you be in your home, whether you be on the water, whether you rest in the shade of a tree in the open, here is your Master.’

Having established that a more powerful Creator sits above us and sees everything that we do, there is also a recognition that the Creator is also our benefactor, planning and providing for us:

‘As you plan for somebody, so God plans for you’, Igbo Proverb, (Nigeria)

Over millennia, this is sometimes distorted into worship of natural resources such as rivers and mountains, but even then, there is always a recognition of a greater power. The Yoruba of Nigeria record that Obatala creates the physical body, but the greater Olodumare who sits in the heavens, blows the spirit into the body [5].

Among the tribes, they will often have statues or use mask ceremonies to access secondary divinities or intermediaries between humans and the High God. Ancestors are also worshipped for this purpose, and are believed to provide a link to their living relatives.

The prominence of ancestors is everywhere in Africa, even amongst the followers of Christianity and Islam. In Africa, the term ancestors does not cover all predecessors, but only those of high rank and achievement, who act as mediators to access divine guidance and favour. In that sense, perhaps these ancestors include the very Prophets of Africa that we are seeking.

Ceremonies and rituals involve the veneration of ancestors and heroes through the use of masks, chanting and drumming in order to have an active dialogue with intermediaries, just as we see with Shaman in other parts of the world. Just as the concept of Satan is familiar to the Abrahamic faiths, in Africa they talk about the Trickster, and ceremonies would seek to ward off the impact of the Trickster and evil spirits.

The modern understanding has evolved through syncretism with Christian and Islamic influences, and often these beliefs are practised alongside Islam and Christianity in rural communities.

Some examples of devotional masks and outfits are shown below (images courtesy of the author unless otherwise attributed):

Shrine to ancestors from Ghana

In Benin, the ritual to achieve the devotion of the Vodun ancestors led to what is now the popularised Voodoo traditions of Haiti in the Caribbean [10].

Travelling around Africa, it is clear that people are comfortable with a social order that has been in place since antiquity.

‘If your parents take care of you up to the time you cut your teeth, you take care of them when they lose theirs’, Akan proverb (Ghana)

It is not easy to date how far back these religious systems go, but as an example, the Bantu people of Central Africa are believed to have emerged from Cameroon and Nigeria around 1000 BCE and then spread in the region. They were organised in tribes with a hierarchy, and each tribe had a chief or king with a religious legitimacy [6]. Other great empires such as Great Zimbabwe built by descendants of the Shona people had amazing architecture depicting their power, but also had what are thought to be temple complexes before the advent of Islam and Christianity through trade [6].

In Africa, especially with traditional rural culture, the concept of respect for elders is very strong. This is not just seen with parents who are treated with respect and kindness, but also with teachers who are shown the utmost respect. Similarly, when visiting a village, there is normally a set of customs to first seek permission from the village chief and declaring your mission before being allowed to engage with other members of the village.

Again the reverence for ancestors stems from the same concept of social order that is seen throughout African life.

It is often evident that adults, children and other family members have an established system, as do more senior figures in a village or community. There are many behaviours that are expected of people. This Yoruba proverb from Nigeria illustrates the Golden Rule of treating others as you would want to be treated yourself:

‘One going to take a pointed stick to pinch a baby bird should first try it on himself to feel how it hurts.’, (Yoruba Proverb, Nigeria)

Often good behaviour is highlighted in proverbs, such as this Kenyan proverb about the virtue of being humble:

‘It is humility that exalts one and favours him against his friends’, Kipsigis Proverb (Kenya)

The Egyptians of north Africa had a clear concept of a day of judgement and life after death as described in their ‘Book of the Dead’. There are similar accounts hidden away in African culture, such as this song from Benin:

‘At the gates of the land of the dead you will pass before a searching Judge. His justice is true and he will examine your feet, he will know how to find every stain, whether visible or hidden under the skin; if you have fallen on the way, he will know. If the Judge finds no stains on your feet, open your belly to joy, for you have overcome and your belly is clean’.

In this song, there are similarities to the Day of Judgement of the Abrahamic faiths. For example, the song mentions that the Judge will see all stains whether visible or hidden; similar to the notion that God can see all of your actions and your intentions. At the end of the examination by the Judge, if the person has no stains, they are joyous just as someone would be if they are destined for heaven.

There is also a recognition that time on earth is limited, and that there is a greater purpose:

‘We are on a market trip on earth: whether we fill our baskets or not, once the time is up, we go home’.

Over time, the concept of ‘home’ may be hazy, but knowledge that this is not the end means that people accept their position in society, accept trials and tribulations such as plagues and floods, and seem to be less inclined to hoarding worldly possessions.

It is clear that Africa has been a cradle of civilization for millennia, and that as mentioned in the Qur’an (10:48), the various tribes across Africa have not been devoid of prophecy and revelation.

The main difference is that the revelations were never written down, and have therefore evolved through verbal transmission from generation to generation. However there are characteristics of the peoples across Africa that show a mature understanding of their position versus nature, the hierarchy of society and respect for elders and forefathers, some of whom are likely to be prophets who would have had a direct communion with their High God or Creator. There are also codes of ethics and morals that are entrenched in these rural communities. 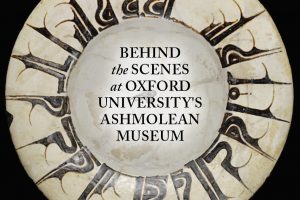 Imagining the Divine – Art & the Rise of World Religions