After reciting Tashahhud, Ta‘awwuz His Holiness, Hazrat Mirza Masroor Ahmad (aba) said that by the grace of Allah, MTA was able to hold its international conference over the weekend. His Holiness (aba) prayed that all who took part were able to benefit from it.

The Era of Propagating the Perfect Guidance

His Holiness (aba) said that the era of the Holy Prophet (sa) was the age for perfection of the true guidance. Then came the era of the Promised Messiah (as) which was for the completion of the propagation of that perfect guidance. Thus, the great mission of the Promised Messiah (as) was to spread the teachings of the Holy Prophet (sa) to all nations and peoples and to achieve this great objective Allah the Almighty Himself provided the means.

His Holiness (aba) said that afterwards, with the establishment of Khilafat-e-Ahmadiyya [the Caliphate of Ahmadiyyat] the propagation of Islam and Ahmadiyyat continued, flourishing by leaps and bounds. In 1938, the voice of the Khalifa reached more and more people through the utilisation of the loudspeaker. This was considered a revolutionary means of progress and a remarkable way of conveying the teachings of Islam. But as people rejoiced over this, the Second Caliph (ra) said that the time was near when the Khalifa would deliver an address from Qadian that would reach the entire world. Later, missionaries in different countries would use the medium of radio to propagate the message of Islam and Ahmadiyyat far and wide.

Establishment of MTA & Reaching the Corners of the Earth

His Holiness (aba) said that now if we fast forward to today, by the grace of Allah, through the medium of television, we are able to propagate the message of Islam Ahmadiyyat to the corners of the world; a clear fulfilment of the prophecy ‘I shall cause thy message to reach the corners of the earth.’ With MTA 19 MTA studios established in different parts of the world and with other countries using high-end resources, new programs and state-of-the-art productions are being created for the sole purpose of spreading the message of Isalm and Ahmadiyyat.

His Holiness (aba) said that programs are being produced in various languages, thereby enabling the message of Islam to be broadcasted to all parts of the world. Whereas MTA started with one channel, now there are various channels to cater to various parts of the world. If it were solely based on our means and manpower, such progress would not be possible. It is thus only by the grace of Allah that such things are possible.

His Holiness (aba) highlighted the various types of programming being produced by MTA and said that they are all proving to be very beneficial in providing moral training for Ahmadiyyat and introducing Islam to people outside of the Community.

His Holiness (aba) said that there are many around the world who have not been able to meet him, yet due to the blessing of MTA, people have been able to establish a direct relationship with him and strengthen their bond with Khilafat. Now through virtual meetings, His Holiness (aba) said that he is able to meet people from all over the world while sitting in the UK. Seeing this advancement, one cannot help but to recall the prophecy of the Second Caliph (ra) who said that the voice of the Khalifa would be heard live across the world.

His Holiness (aba) said that it is through MTA that the unity of this Community increases both spiritually and administratively. It eliminates distances and removes barriers, and ensures that the Community of the Promised Messiah (as) remains united at the hand of Khilafat. 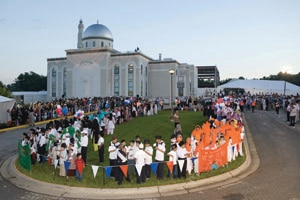 The Significance of Sacrifice in Your Pledge