After reciting Tashahhud, Ta‘awwuz and Surah al-Fatihah, His Holiness, Hazrat Mirza Masroor Ahmad (aba) said that every year, on the 20th of February, we commemorate the prophecy of Musleh Maud, foretelling the Promised Messiah (as) about the birth of a son, in response to those who said that Islam did not present any signs. Thus, the Promised Messiah (as) announced that one of the great signs which would manifest through him would be the birth of a son who would live a long life and render great services to the faith.

His Holiness (aba) said not only was this prophecy made, but the specific time of this son’s birth was foretold, and fulfilled, along with the fulfilment of the many other signs.

His Holiness (aba) said that he would highlight aspects from the early life of Hazrat Musleh Maud (ra), his health, and the manner in which Allah the Almighty treated him.

His Holiness (aba) said that one of the prophecies regarding the promised son was that he would live a long life. However, Hazrat Mirza Bashiruddin Mahmud Ahmad (ra) described that in his childhood, his health was quite poor, to the point that at times it seemed as if he was wavering between life and death. It was thought that a child with such health could not live a long life. Furthermore, he also had an ailment of the eyes, to the extent that he was practically unable to see out of one eye. He was also diagnosed with various other ailments and illnesses. He struggled with his studies, and his teachers would complain to his father, the Promised Messiah (as) about his poor performance.

His Holiness (aba) said that in light of this, who could have thought that a child with such poor health would live a long life, as had been prophesied? Furthermore, another one of the prophecies was that he would be filled with secular and spiritual knowledge, yet was not performing very well in basic studies. However, Hazrat Musleh Maud (ra) states that this promise of being filled with secular and spiritual knowledge was made by God; thus despite his performance in school, he would go on to pen such magnificent literary works which remain unmatched. Thus, he was certainly taught by God himself.

His Holiness (aba) said that Hazrat Mirza Bashiruddin Mahmud Ahmad (ra) presented an example of how God Himself bestowed knowledge upon him. Once, when he was young, he had a dream in which he heard the ringing of a loud bell. He then saw a frame forming, and within the frame there was a picture. The picture began moving, and then the image came out of the frame in the form of a person, who said that he was an angel of God. He said that he had been sent to teach him the meanings of Surah al-Fatihah, the opening chapter of the Holy Qur’an. Thus, he began teaching up until the verse ‘thee alone do we implore for help.’ The angel then said that up until then, all the exegites had only written their commentaries up until that verse. Then he proceeded to teach Hazrat Musleh Maud (ra) the commentary of the entire chapter. This was to signify that Hazrat Musleh Maud (ra) was bestowed with true knowledge of the Holy Qur’an. Thus, Hazrat Musleh Maud (ra) made an open challenge to the world that no one could challenge his knowledge of the Holy Qur’an. This bore true, as no one was able to accept this challenge.

Inspiration of a New Meaning in Surah al-Fatihah

His Holiness (aba) said that once, while Hazrat Musleh Maud (ra) was young, he was invited to deliver a speech after his football team won their match. He had not prepared at all, and thought back to the dream he had seen of the picture frame. He prayed to God to bestow within him such points regarding Surah al-Fatihah as had never been explained before by any commentator. As a result, God inspired him with knowledge regarding the verse ‘not of those who have incurred Thy displeasure, nor of those who have gone astray.’ He explained that every Muslim should pray not to be among such people, elucidating that ‘those who have incurred displeasure’ refer to the Jewish people and ‘those who have gone astray’ refers to Christians. Thus, we must pray to be saved from making the same mistakes as them. For example, those who reject the Promised Messiah (as) would be making the same mistake as the Jewish people of the past, and then at the time of the Messiah, there would be an uprising of Christianity, which would draw people away from the true faith due to their lack of understanding. It is interesting that the opening chapter of the Holy Qur’an was revealed in Makkah at a time when neither the Jews nor the Christians were particularly against Islam. It was in fact the idolaters of the time who were most opposed to Islam. Thus, by not mentioning them, God showed that idolatry would be defeated and never present any true danger.

His Holiness (aba) said that after his speech and presenting these points, various learned and scholarly people came to him and expressed their amazement at the level of knowledge which he presented. Hazrat Musleh Maud (ra) said that no matter the scholar, they would never be able to present a point which he could not refute or explain in light of the Holy Qur’an.

Realisation in His Early Life About the Existence of God

His Holiness (aba) said that in 1900, when Hazrat Musleh Maud (ra) was 11 years old, he began wondering whether there was a God and why he believed in Him. He said that even at that age, he pondered a great deal, and eventually came to the certainty that God truly exists. He was overjoyed at this realisation and prayed never to have doubt in God’s existence. It was at that same age, that Hazrat Musleh Maud (ra) wore a cloak of the Promised Messiah (as) and prayed profusely. Later, when pondering over the truth of Ahmadiyyat, he thought that if God exists, then the Holy Prophet (sa) is true. If the Holy Prophet (sa) is true, then so too is the Promised Messiah (as), Thus, if the Promised Messiah (as) is true, then Ahmadiyyat must be true as well. One night, he was looking at the stars and thought what is there beyond the stars? He came to the realisation that there would be more stars. He kept asking what would be beyond that, then coming to the same realisation. He then came to the conclusion that if something like stars can seem to be continuous, then surely God is Limitless. Thus, this was yet another example of how this child who did not complete a formal education, was filled with such intricate thoughts and realisations, as a result of the knowledge bestowed upon him by God Himself.

His Holiness (aba) said that nevertheless, Hazrat Musleh Maud’s (ra) vision from one eye was extremely weak. He described that he could see the path which he was walking on, but could not recognise people’s faces. Furthermore, he could not read from that eye. Despite this all, he was able to reach profound levels of knowledge.

Complaint About His Handwriting

His Holiness (aba) said that Hazrat Hakim Maulvi Nooruddin (ra) would read aloud to Hazrat Musleh Maud (ra). He taught him the Holy Qur’an and its translation in three months and its commentary in two months, and then taught him all of Sahih al-Bukhari in the span of two to three months. He also began learning medicine from him as well along with various other types of knowledge.

His Holiness (aba) said that the writings of Hazrat Musleh Maud (ra) which span thousands upon thousands of pages are a valuable treasure which we must take full advantage of.

His Holiness (aba) said that Hazrat Mirza Bashiruddin Mahmud Ahmad (ra) went on to declare that he was the fulfilment of the prophecy of Musleh Maud given to the Promised Messiah (as), thus proving to be a living sign for the religion of Islam and its truthfulness. In fact, the words of this prophecy will continue to bear true until the mission of the Promised Messiah (as).

Truly Benefitting From the Prophecy of the Promised Son

His Holiness (aba) said that commemorating this prophecy will only be of benefit when we realise that we must spread the true message of the Holy Prophet (sa) throughout the world, and bring the world under his banner. Today, there is none other than the followers of the Promised Messiah (as) through whom the flag of Islam can be hoisted and the message of Islam be spread throughout the world. 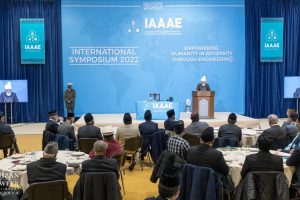 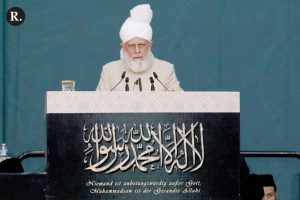 The Blessings of God and His Caliph 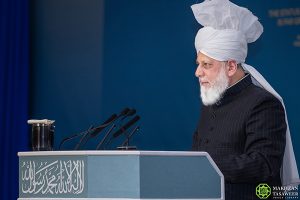