Obedience to Khilafat [Caliphate] is a Commandment of God

‘Khilafat Will Continue’ – A Lesson in Safeguarding Against Disorders

Obedience to Khilafat [Caliphate] is a Commandment of God

A true system of successorship (Khilafat) is established after the demise of a prophet. Thereafter, the Caliphs represent the mission of that prophet, and are a representation of a living connection with God. The Khilafat (Caliphate) of the Ahmadiyya Muslim Community began after the demise of the Promised Messiah (as), in fulfillment of God’s promise in the Holy Qur’an, and the prophecies made by the Holy Prophet (sa). As such, just as it is necessary to obey the commandments of God and His Messenger (sa), one of the most crucial aspects for the establishment and continuation of a true Khilafat is obedience, as His Holiness (aba) explains:

‘No matter if one makes a thousand claims to being a believer, until and unless they follow the commandments of God Almighty and His Messenger (sa) with complete conviction and full certainty and becomes steadfast in the face of every test and trial, they cannot be granted success. Thus, in order to attain true success and triumph, it is incumbent to show complete obedience to Allah the Almighty and His Messenger (sa). In order to attain the pleasure of Allah the Almighty, it is incumbent to follow His commandments with the fear that lest one incurs the displeasure of their beloved God due to some action they may have committed. Likewise, it is incumbent to uphold righteousness. Every good deed and excellent moral needs to be adopted because these are commandments of God Almighty. It is only when one fulfils these conditions that they can attain success and be granted the protection of Allah the Almighty.

When one reflects upon this, they will observe that on many occasions they fail to maintain the standard of obedience which is expected of them – and even in instances where they do act upon something which is against their wishes, they do so begrudgingly. The instruction to obey the commandments of Allah the Almighty and His Messenger (sa) has appeared repeatedly in these verses (24:52-58), along with the promise of perpetuating Khilafat. In other words, Allah the Almighty is stating that the institution of Khilafat comes under the commandment of showing obedience to Allah the Almighty and His Messenger (sa). Hence, it is vital for one to act upon the directives of Khilafat as this is also among the commandments of Allah the Almighty. In fact, in order to secure the continuation of one’s worldly and spiritual life, it is essential for believers to raise the standard of their obedience.

Obedience to the Caliph of the time however, is even more important than the obedience one shows to an ordinary Amir.’[2]

‘Khilafat Will Continue’ – A Lesson in Safeguarding Against Disorders

It has always been the case that the elect of God are faced with opposition. Similarly, it has always been the case that God’s elect prevail, as He Himself has promised. The same applies to the institution of Khilafat (Caliphate); all of the Caliphs are protected and helped by God, and no matter how vehement the attempts against them may be, God upholds Khilafat. Thus, it is not out of the ordinary for there to be attempts and disorders raised (futile as they may be) against Khilafat, as has been seen in the past. But according to God’s promise, Khilafat will always persist, as His Holiness (aba) states:

At the same time, Allah the Almighty has made it the duty of those who claim to be associated with this institution that they must become helpers of Khilafat in order to maintain the establishment of faith in the world. Whilst bearing in mind their oath of allegiance (bai’at),they must firmly resolve to safeguard their own faith, and introduce others to the light of faith as well. As the Promised Messiah (as) has stated, it has been the practice of Allah the Almighty since time immemorial to establish two manifestations, and we are all well-aware that the second manifestation is Khilafat. Hence, Khilafat has a vital connection with the progress of religion and is a crucial part of the Islamic Shari’ah (law). The religion cannot progress without Khilafat and the Community (Jama’at) cannot remain united without Khilafat.

By the grace of Allah the Almighty, each one of us who is attached to Khilafat knows that the continuation of Khilafat within this Community is crucial to the faith; this same conviction was held by those who remained loyal to Khilafat and refuted the proponents seeking to create disorder at the time of the First Caliph’s (ra) demise. They understood that they could not maintain faith without the institution of Khilafat. All thanks is due to Allah, because it is owing to the sacrifices and firm faith of those people that many of us who hail their progenies are benefitting from the blessings of Khilafat. The greatest efforts and sacrifices made for this institution were by the Second Caliph (ra). His opponents levelled many allegations against him, however, his heart’s desire was to protect the institution of Khilafat. I will present a mere glimpse of this before you in the words of the Second Caliph (ra) himself, because this too is a part of history, and we must study history in order to safeguard ourselves from disorder. This is also necessary in order to strengthen our faith, as these things certainly prove to be means of doing so.

The Second Caliph (ra) states, “I called Maulvi Muhammad Ali (ra) into one of the rooms in the same home where the First Caliph (ra) passed away, and asked him not to contend whether there should, or shouldn’t be Khilafat, and that his views should not extend beyond the thought that such a person should be elected as Caliph, who would protect the interests of the Community and would strive for the progress of Islam. Only those matters can be reconciled wherein there is potential for compromise.” The Second Caliph (ra) continues, “I said to Maulvi [Muhammad Ali] that in terms of personal views, I could sacrifice my own sentiments for his sake, but there could be no compromise in matters of principle, because principles cannot be disregarded under any circumstance. The only difference between the two of us was in the belief that Khilafat is a necessary part of the faith. However, he could not deem Khilafat to be invalid, because he had only just been under the allegiance of a Caliph (i.e. he had pledged allegiance to the First Caliph (ra) who had just passed away), yet now he was saying that we do not need Khilafat and are free from Khilafat.”

The Second Caliph (ra) said to him, “For six years, you maintained your oath of allegiance; something that was permissible for six years cannot be impermissible now, especially that which is commanded by Allah the Almighty. The difference in our positions is that if you were to concede, you would have to adopt that which you had already adopted (his oath of allegiance to the First Caliph). However, if we were to concede our view, we would have to abandon that which our beliefs and faith forbid against abandoning, and we would be opposing that which we have never opposed. Therefore, it is only fair for you to continue upon the path which you have already adopted and do not force us to act in defiance of our faith and principles.”

As for the question of who would be beneficial in the progress of the Community and Islam, the Second Caliph (ra) said to Maulvi Muhammad Ali, “We will accept whoever you are agreeable to as being the next Caliph.” By the grace of Allah the Almighty, majority of the Community desired for the institution of Khilafat to continue, as they kept in mind the clear guidance of the Promised Messiah (as). When this meeting became prolonged, Maulvi Muhammad Ali stubbornly left. People then began knocking on the door and raising a clamour, asking for the decision to be made quickly and for their pledge of allegiance to be taken. The Second Caliph (ra) states, “I told Maulvi Muhammad Ali that I had removed his reservations, and so the only matter before him should be who the next Caliph will be, rather than the thought that there should not be a Caliph. Upon this, Maulvi [Muhammad Ali] said, ‘I know you are only pressing this issue because you know who the next Caliph will be.’” The Second Caliph (ra) says, “I responded to him by saying that I did not know who the Caliph would be.” The Second Caliph (ra) continued, “I will pledge allegiance to whoever you (Maulvi Muhammad Ali) elect as the Caliph, and when I pledge allegiance to the Caliph who you elect, there will be no fear of opposition, because the supporters of Khilafat listen to me.” However, Maulvi Muhammad Ali did not agree. The Second Caliph (ra) states, “I told Maulvi Muhammad Ali that he kept thinking ill of me, yet how could I truly show him what was in my heart? I was ready to offer any sacrifice possible.” Then, when the door opened and he emerged, Maulvi Muhammad Ahsan Amrohi presented the name of the Second Caliph, Hazrat Mirza Bashiruddin Mahmud Ahmad, and the Community urged him to accept their pledge of allegiance.  He said that he did not even remember the words to the pledge of allegiance, to which Maulvi Sarwar Shah said that he would read the words out to him. Thus, the disorder attempted by the mischief mongers who sought to stifle this second manifestation was foiled by Allah the Almighty, in fulfillment of that which was foretold by the Holy Prophet (sa), thereby establishing Khilafat upon the precepts of prophethood for the second time after the demise of the Promised Messiah (as).

Those who had distanced themselves from Khilafat were both religious and secular scholars, they were educated, experienced, affluent, high-ranking and had control over all the funds in the Anjuman’s treasury, yet they still failed miserably. After the election of the Second Caliph (ra), not only did Maulvi [Muhammad Ali] leave Qadian, but later, those with him who refused to pledge allegiance [to Khilafat] continued to create various disorders in their attempts to eliminate the institution of Khilafat, yet they were always met with failure. Why? Because God Almighty has promised that the institution of Khilafat will continue.’[3] 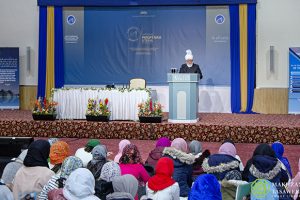 Friday Sermon Summary 18th February 2022: ‘He Will be Filled With Secular & Spiritual Knowledge’ – God’s Hand in Fulfilling the Prophecy of the Promised Son
The Blessings of God and His Caliph
Comment