Petra is one of those unique locations, with homes and temples carved into the rocks. The area may have been settled since 9,000 BCE, and the Nabateans started to occupy the site from 400 BCE. Petra soon became the capital of the Nabateans.

The Nabateans were nomadic Arabs who were masters of trade and also quite advanced in technology such as irrigation. Petra became their capital city at a crossroads of trade routes linking Egypt to the Middle East, Turkey and Greece. The Nabateans came into contact with the Hebrew tribes, Romans, Persians and other great powers in the region. There are signs of the influences of many of these cultures as adopted in the architecture of Petra.[1]

Petra has many associations with religion. The local region known as Wadi Musa is claimed to be where Moses (as) drew up water after striking the rocks. The Nabateans themselves worshipped a pantheon of idols, possibly many of them adopted through trade links with other cultures. Some of their idols included Lat, Baal, al-Uzza, Dushaira and Manat [2] which also appeared in Makkah before the dawn of Islam. They built temples such as Qasr el-Bint and the Winged Lions Temple in Petra.

At its height under King Aretas IV (8 BCE-40 CE), there was significant construction in Petra, and the king also had influence. The King’s daughter had been married to Herod Antipas in Palestine, but when they divorced, it was Herod’s remarriage that gained the displeasure of John the Baptist (as).

Petra was annexed by the Roman Emperor Trajan in 106 CE, and then in the fourth century, many of the buildings were used as churches under the Byzantine empire, but following earthquakes over a period of time, the structures were left alone.

Petra has a resemblance to the People of the Rock mentioned in the Qur’an for hewing out houses in the mountains.[3]

Petra went into decline whilst it was abandoned under shifting sands. It was only in 1812 that Swiss explorer Burckhardt rediscovered the rose-red city of the desert after disguising himself as a Bedouin and gaining their trust to guide him to the legendary city. The fact that the city had fallen into obscurity but left intact for future generations seems to suggest that these people and this city was preserved to act as a warning for future generations.

Petra is easy to visit today with most of the sites now excavated and clearly visible, including the iconic Khazneh, the various tombs carved into the mountains and the Ad-Deir Monastery which takes almost an hour climbing up the mountains to discover. 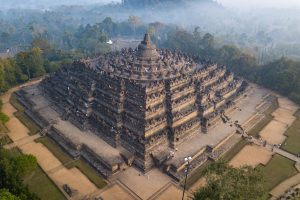 The Need of the Holy Quran