This was Nakia’s description of the Eid celebrations at her mosque in Marvel’s newest show Ms. Marvel.

It’s encouraging to see that Marvel has depicted many aspects of Muslims in a refreshingly positive way and as a normal part of everyday society (which we are). However, certain extremely important aspects of the Muslim identity are glossed over in a very cursory manner. For Muslims watching, the Marvel Cinematic Universe’s (MCU) portrayal of Eid in its latest series, Ms. Marvel, doesn’t really encapsulate the actual essence of Eid.

As a Muslim born and raised in the West, the Eid I know is so much more than just the food and the gatherings which were depicted in Ms. Marvel.

So then, what is Eid really all about?

Firstly, the show didn’t highlight the most fundamental aspect of Eid – the Eid prayer. The very fact that there is a special prayer on Eid day highlights the significance of Eid. Normally, Muslims are ordained to offer five prayers in a day, but on Eid, there’s the additional Eid prayer making the total number of prayers on Eid day six.

It goes to show that the true Islamic essence of celebration isn’t just rooted in wearing the finest clothes, eating the best foods and coming together with friends and family – it’s primarily about worshipping God and being thankful to Him.

While it’s true that Muslims should dress their best and gather with their families and communities on Eid, these gatherings aren’t meant to simply be celebrations similar to any other occasion, even though that’s what it may seem like through representations on mainstream or social media.

If we’re talking about Eid al-Adha, the Festival of Sacrifice, then the significance is far greater.

This festival commemorates the famous incident of Abraham’s (as) sacrifice, when he was Divinely commanded to sacrifice is son Ishmael (as). Out of his sincere and absolute devotion to God, Abraham (as) did not hesitate and when he approached his son Ishmael (as), he too immediately expressed his submission to the will of God. Although God would later reveal that the physical sacrifice of his son was not required and that the spirit of sacrifice which had been exhibited was accepted, it left a lasting legacy and example for generations to come.

It truly is a heroic story when you think about it, but they weren’t the only heroes of the story.

Ms. Marvel aims to show a strong Muslim woman character who develops into a powerful hero. In reality, the concept is quite accurate, because there’s no shortage of female ‘heroes in Islam’ In fact, while describing the importance of Ms. Marvel being a strong Muslim woman character, Sue Obeidi, director of the Hollywood Bureau for the US Muslims Public Affairs Council said,

‘Islam has no shortage of heroic Muslim women in its history.’

One of those heroic women is Hagar (as), wife of Abraham (as), who truly embodied the definition of a hero; someone who is admired for outstanding achievements and noble qualities.

When Abraham (as) left her and their infant son in a barren desert, her unshakeable conviction in God and heroic bravery were nothing short of legendary and enabled her to make the necessary sacrifices and take up the challenge placed before her by God. She didn’t worry for herself, but made the sacrifice and took up the challenge for the greater good.

When her infant child cried out of thirst with absolutely no water or means for it in sight, she didn’t despair or doubt, instead she quite literally bore the blazing heat of the sun and ran across the sweltering sand between two mountains in search of water – motivated by the desperate crying of a child with her faith solely in God.

Finally, by some superhuman force – a miracle if you will – water sprung forth from that barren land.

It may sound like something out of a comic book, but this actually happened. Hagar (as) was a real-life hero.

In fact her heroic courage and sacrifice were so admirable, that God immortalized her brave heroism and ordained Muslims to commemorate her valour by running between the very same mountains – Safa and Marwah – as a fundamental part of the Muslim pilgrimage to Makkah.

So, when families and friends get together on Eid, it’s to commemorate the brave and courageous sacrifices made by a family of heroes 4,000 years ago.

Eid is about worshipping God; it’s about making a sacrifice not only to symbolise our devotion to God but to serve others in need; it’s about gathering to remember the heroic efforts of those before us, and striving to discover that hero in each one of us.

That’s what Eid is really about.

With Veganism on the Rise, Why Do Muslims Still Sacrifice Animals on Eid? 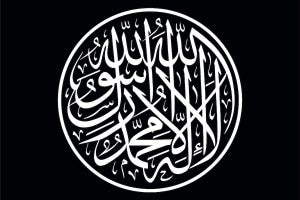 Abraham’s Sacrifice According to Christianity and Islam
Was the Holy Qur’an Revealed in Ramadan?
Comment