To sacrifice something means to essentially give up something of value and forsake something that is dear to us. In the context of animal sacrifice in Islam, sacrifice means to slaughter an animal (goat/sheep/cow/camel), particularly on occasions such as Eid al-Adha, the Festival of Sacrifice. This Eid is celebrated to commemorate the loyalty and sacrifice of the Prophet Abraham (as). He was willing to make the ultimate sacrifice; sacrificing his own son upon the decree of God. His young son Ishmael (as) was also ready and willing to submit to the will of God and be sacrificed in His cause. This teaches Muslims a lesson that faith in God demands submitting to His will and only then can one develop a close relationship with God.

Abraham (as) was placed in an unfathomably difficult circumstance, but he fulfilled his duty to serve God, demonstrating the attributes of resilience, devotion and piety. The Promised Messiah (as) explained the philosophy behind this by saying,

‘Abraham, peace be upon him, was even ready to slaughter his son to fulfil the commandment of God Almighty…This was a hidden indication of the fact that man ought to become wholly devoted to God; and one’s own life, and the blood of one’s children, and one’s kith and kin, ought to appear insignificant in the face of God’s command.’

One might ask, if the true purpose of sacrifice is to attain spiritual progress, then what is the point of animal sacrifice? It is vital to understand the true spirit of the sacrifice and its sacred symbolism.  The Promised Messiah (as) expounded the philosophy of the animal sacrifice offered at the time of Eid:

‘Certainly, in our religion, this action is counted as one of those that draws one near to Allah, to Whom be praise…And it is for this reason that the animals to be sacrificed are called Qurbani [from Qurb, meaning nearness]; as it has been said that all those who perform it sincerely and devotedly and faithfully see more of Allah and become nearer to Him’

The Promised Messiah (as) has also explained that the celebrations of Eid al-Adha reminds Muslims to purify their soul, cleanse their heart, partake in spirituality, and endeavour to absorb the radiance and light that is present in this duha [time of brightness].

Animal cruelty and poor animal welfare are some of the main reasons that turn people away from eating meat. Islam utilises the opportunity of Eid al-Adha to teach Muslims compassion and promote animal welfare. Muslims are only permitted to sacrifice animals over a certain age, who are well reared and looked after.  It is important to note just as with all halal meat, the animal is sacrificed in the most humane possible way. While sacrificing the animal, the name of Allah recited reminding Muslims to practice humility as everything belongs to Allah the Exalted and will ultimately return to Him.

With regards to the sacrificing of animals, the Holy Qur’an states ‘Their flesh reaches not Allah nor does their blood, but it is your righteousness that reaches Him’. (22:38) Thus, the religious celebrations of Eid al-Adha and animal sacrifice are commandments that promote compassion with moral and ethical values.

The Holy Qur’an illustrates that the main objective of animal sacrifice is to progress in piety and righteousness. Eating meat of Eid sacrifice serves as a reminder for the believers that the only Being superior to humans is Almighty Allah. Therefore, human beings should reserve all their endeavours of sacrifice, submission, and devotion for the sake of God Almighty only. The fundamental philosophy of Islamic sacrifice is to relinquish the lower form of gains for a higher form of success. The worldly successes and achievements are temporary and minuscule when compared to the true success of finding God.

Hence, Islam enjoins its followers to forsake the material world and its possessions to achieve the ultimate victory of the Divine nearness.  The sacrifice of Eid al-Adha is reminder for Muslims to perform good deeds and share the willingness to sacrifice for the sake of adhering to Allah’s commandments just as His prophets and their successors did. May Allah the Exalted enable us to do so.

Aroosa Mahmood is a Psychology Undergraduate student in Sheffield and has a keen interest in research relating to food and animal welfare.

Professor Amtul Razzaq Carmichael MD, M Ed, FRCS (Gen Surg.), MBBS, is a consultant. She qualified in 1987 with gold medals for academic Excellence and undertook her surgical training at major teaching hospitals in London, Edinburgh and Philadelphia. She has authored many articles for major peer-reviewed scientific journals. She is a senior member of The Review of Religions Editorial Board as well as Assistant Manager.

Eid in the Marvel Cinematic Universe 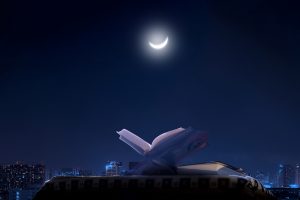