Jalsa Salana UK is the annual gathering of Ahmadi Muslims that takes place every year in Hampshire. It’s an international event so people come from all over the world.

To celebrate the diverse crowd that comes, we hoist flags of all the nations where people come from. These days, the Ahmadiyya Muslim Community has branches in nearly all the world’s countries.

So pretty much all the world’s flags get hoisted in the designated area within the site of the Jalsa event.

For some nations, 2022 marks the occasion of an important national anniversary so their flags will hold a special significance for them this year.

Here are those flags. Can you guess the countries they belong to?

(Hint: It’s easier than the riddle of the sphinx.)

(Hint: Once called Mesopotamia. Tigris and Euphrates flow through here.)

Before we get to the answers, I think it’s briefly worth mentioning where we get all these flags from in the first place.

We got most of the flags we currently use for UK Jalsa during the time of the Community’s Fourth Caliph (rh) in 1985, when they were donated in bulk by a member of our community who had connections at various embassies.

Since then, we gradually bought and accumulated more flags because people from a growing number of countries participated in our annual event. Now we have flags from almost all the world’s nations.

Since most of them are nearly 40 years old, they have to be stored carefully. When it’s time for Jalsa, they’re taken out of storage and gently ironed so that they’re neat and presentable for the occasion.

The flags are then transported to the Jalsa site, where they are then ready to hoist up to mark a truly international event.

Now, without further ado, let’s get to the…

No. 1 – Brazil gained independence from Portugal in September 1822. Brazil will be 200 years oldthis year.

No. 2 – Turkey was the leading nation of the Ottoman Empire, which ended in November 1922, after many centuries of ruling the Middle East and being one of the world’s great powers. 100 year later, Turkey is a highly developed regional power.

No. 3 – The Irish Free State was formed in December 1922 after years of fighting the British Empire and was a precursor to the current Republic of Ireland.

No. 4 – Pakistan gained independence from British rule on 14th August 1947 and was originally formed as an independent homeland for both the Muslims and other religious minorities of the Subcontinent. During Partition, the Headquarters of the Ahmadiyya Muslim Community were moved from Qadian in India to the newly founded town of Rabwah in Pakistan.

No. 5 – India officially gained independence from British rule on 15th August 1947, a day after its neighbour Pakistan. Today, India is not only the world’s largest democracy but as of 2022, it’s also the country with the largest population in the entire world. The Indian town of Qadian remains a holy site for Ahmadi Muslims around the world and draws many visitors.

No. 6 – Algeria won independence in July 1962 after fighting an 8-year war against the French Empire, its former colonial ruler. Despite being much poorer, having a much smaller population and being quite close geographically, Algeria defeated one of the world’s great powers.

No. 7 – Jamaica gained independence in August 1962 from the British. 50 years on, this Caribbean country is doing quite well for itself and has a high score on the HDI (Human Development Index). Jamaica’s Independence Day 2022 will actually coincide with one of the three days of Jalsa UK 2022 (on Saturday 6th August, which will also be the second day of Jalsa). Let’s pray that Jamaica will be especially blessed on account of this.

No. 8 – Uganda gained independence from the British in October 1962. This year Uganda will celebrate its 60th anniversary of being an autonomous nation.

No. 9 – Rwanda gained independence from Belgium in June 1962. This young country is now 60 years old.

No. 10 – Burundi gained independence from Belgium in July 1962. It has now enjoyed 60 years of independence and freedom as of 2022.

No. 11 – Egypt made a unilateral declaration of independence from the British Empire in February 1922. This year marked its 100 year anniversary. Not only that, but they had a revolution in 1952 which led to the end of monarchy. This year also marks 70 years of Egypt being a republic.

No. 12 – East Timor gained independence from Indonesia in May 2002. This year marks 20 years of freedom for the people of East Timor

No. 13 – Albania gained independence from the Ottoman Empire in November 1912. This year will mark Albania’s 110th anniversary of independence.

No. 14 – Cuba gained independence from America in May 1902. Cuba celebrated its 120th anniversary this year.

No. 15 – New Zealand achieved full independence from the UK in 1947, when it was finally able to govern itself with full sovereignty. This year marks the 75th anniversary of that momentous occasion.

No. 18 – Iraq gained independence in October 1932. This year marks the 80th anniversary.

No. 19 – Samoa became independent from New Zealand in June 1962. This year marks the 60thanniversary.

No. 20 – Due to a referendum in 1992, Bosnia-Herzegovina became independent from Yugoslavia. This year marks the 30th anniversary of that event.

No. 21 – Trick question: this is not the flag of any country. Instead it’s the official flag of Lajna Ima’illah, the Women’s Branch of the Ahmadiyya Muslim Community. The Women’s Branch was founded in 1922 by the Community’s Second Caliph (ra) to promote the spiritual and worldly education and progress of the women of the community. 100 years on and the women of the Ahmadiyya Muslim Community have excelled in all professional fields of science, technology, law, medicine etc.

For those of you who are curious, here’s a picture of the official flag that represents the whole of the worldwide Ahmadiyya Muslim Community:

The Ahmadiyya Muslim Community was founded on 23rd March 1889 by Hazrat Mirza Ghulam Ahmad (as) of Qadian, the Promised Messiah and Imam Mahdi.

At first there were only 50 members. Now there are tens of millions of Ahmadi Muslims in nearly every country in the whole world.

In most of these countries, Ahmadi Muslims hold an annual gathering known as a “Jalsa” to promote the values of spirituality and unity.

His Holiness (aba) resides in the UK so the UK Jalsa holds a special importance for Ahmadi Muslims around the world.

May Allah the Almighty always bless the institution of Jalsa. Ameen. 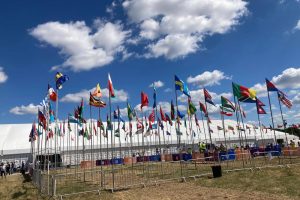 Jalsa Moments: A Look Around the Jalsa Site 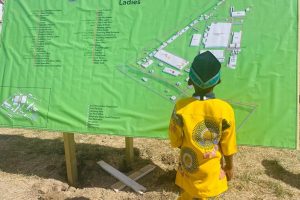 Heard at Jalsa: The Children’s Edition