The Holy Qur’an, upon which The Philosophy of the Teachings of Islam was based.

Two Phases of the Life of the Holy Prophet (sa)

That is why God Almighty divided the life of the Holy Prophet (sa) into two phases; one phase of hardship and calamities and sufferings, and the other of victory; so that during the phase of sufferings those high moral qualities might be demonstrated which come into play at such times, and during the phase of victory and authority, those high moral qualities might be illustrated which cannot be displayed in the absence of authority. Thus, both these types of qualities were perfectly illustrated in the life of the Holy Prophet (sa), by his passing through both these phases and conditions. During the period of trials in    Makkah, which extended over thirteen years, the Holy Prophet (sa) demonstrated in practice all the high qualities which a perfectly righteous person should exhibit at such a time, such as trust in God, perfect serenity under sufferings and the steady and eager carrying out of duties and fearless courage. Observing his steadfastness, many of the disbelievers believed in him and thus testified that it is only the one who has complete trust in God who can display such steadfastness and endurance of suffering.

During the second phase, that is to say the phase of victory, authority and prosperity, he demonstrated such high qualities as forbearance, forgiveness, benevolence and courage, so that a large number of the disbelievers believed in him through witnessing his exercise of those high qualities. He forgave those who had persecuted him, granted security to those who had expelled him from Makkah, bestowed great wealth upon those among them who were in need and having obtained authority over his bitter enemies, forgave them all. Witnessing his high morals, many of them testified that such qualities could only be demonstrated by one who comes from God and is truly righteous. That is how all the rancour, which his enemies had entertained against him over a long period, was washed out of their hearts in an instant. His greatest quality was the one that is set out in the Holy Qur’an in the following words:

My worship and my sacrifices and my living and my dying are all wholly for Allah. This means that the whole purpose of his life was to demonstrate the glory of God and to provide comfort for His creatures, so that through his constant suffering of death they might procure life.

No one should be misled by the mention of his death in the cause of God and for the good of His creatures, to think that he had at any time (God forbid) contemplated destroying himself, imagining like the ignorant and the insane, that his suicide would be of benefit to others. He was entirely free from any such stupid line of thinking and was wholly opposed to it. The Holy Qur’an considers anyone who is guilty of self-destruction as a great offender, liable to severe chastisement, as it says:

Do not commit suicide and do not become the cause of your own destruction.

It is obvious that if X suffers from pain in the stomach, it would be futile for Y to break his own head out of pity for X. That would be no virtuous deed but only needless suffering through stupidity. In the circumstances, it would have been virtuous on the part of Y to minister to X in an appropriate and useful manner, for instance, by procuring medical advice and the required medicines for him. His breaking his own head would do no good to X. It would be the infliction of needless suffering upon a noble part of his own body. In short, the true meaning of the verse cited above is that the Holy Prophet (sa), out of true sympathy, had devoted his life to labour for the welfare of mankind and through supplications and exhortations and enduring their persecution and by every proper and wise means, had laid down his life and sacrificed his comfort in this cause; as God the Glorious has said:

Haply thou wilt risk death grieving that they do not believe; and: Let not thy soul waste itself in sighing after them.

Thus, the wise way of laying down one’s life in the service of one’s people is to endure hardship in their service in accord with the beneficial law of nature, and to spend one’s life working out appropriate projects to that end, and not to strike one’s head with a stone because of the perilous situation of one’s people resulting from their errors or afflictions, or to depart this life after swallowing two or three grains of strychnine imagining that through this absurd device one would open the way of salvation for one’s people. This is not a manly method, but is a feminine tendency. It has always been the way of faint-hearted people that finding themselves unable to endure hardship they run towards suicide. Whatever explanation may be offered in respect of it there can be no doubt that such action is sheer folly.

Again, it is obvious that the endurance of hardship and nonresistance to an enemy on the part of a person who never had the opportunity to take revenge, cannot be accounted a moral quality for it is not known how he would have behaved if he had had an opportunity of taking revenge. Unless a person passes through hardships and then achieves authority and prosperity, his true qualities cannot be manifested. It is obvious that a person whose whole life is spent in a state of weakness, indigence and helplessness, enduring persecution all the time, and who is never in a position of authority and power and prosperity, cannot be adjudged as possessing high moral qualities. If he has had no opportunity of taking part in a battle, it cannot be determined whether he is brave or a coward. We cannot make any estimate of his character as we do not know how he would have treated his enemies if he had overcome them, or how he would have spent his wealth, if he had become prosperous. Would he have hoarded it or would he have distributed it among the people? If he had been present in the field of battle would he have run away or would he have behaved as a brave fighter? In the case of the Holy Prophet (sa), Divine favour and grace afforded him the full opportunity for the manifestation of his moral qualities. He displayed generosity, bravery, meekness, forbearance and equity on their appropriate occasions to such perfection that it would be a vain effort to look for their match in any other person. In both phases of his life, in weakness and power, indigence and prosperity, he demonstrated to the whole world to what high degree he comprehended all moral qualities. There is no high moral quality for the exercise of which God Almighty did not afford him an opportunity. All excellent moral qualities like bravery, generosity, steadfastness, forbearance, meekness, etc., were in his case so clearly established that it is not possible to seek his equal. It is also true that those who had carried their persecution of him to the extreme and had designed the destruction of Islam were not left unpunished by God. To forego chastisement in their case would have amounted to the destruction of the righteous, under the heels of their enemies.

The Purpose of the Wars of the Holy Prophet (sa)

The purpose of the wars of the Holy Prophet (sa) was not to cause needless bloodshed. The Muslims had been expelled from their ancestral homes, many innocent Muslim men and women had been martyred and still the wrongdoers were not prepared to restrain themselves, and continuously obstructed the progress of Islam. In these circumstances the Divine law of security demanded the safeguarding of the persecuted ones against total destruction. Therefore, those who had drawn the sword were opposed with the sword. Thus, those wars were directed towards rooting out the mischief of those who were bent upon murder, and were aimed at repelling evil. They took place at a time when the wrongdoers were bent on the ruin of the righteous. In these circumstances, if Islam had not had recourse to measures of self-defence, thousands of innocent women and children would have been slaughtered and an end would have been put to Islam.   It is a great error on the part of our opponents that they imagine that revealed guidance must under no circumstances inculcate resistance to the enemy, and should always demonstrate its love and mercy by way of meekness and gentleness. Such people imagine that they display great reverence for God, the Lord of Honour and Glory, by attributing to Him only the qualities of gentleness and tenderness. But those who are given to reflection and pondering can easily perceive that such people are involved in gross and obvious error. A contemplation of the Divine law of nature clearly shows that it certainly is pure mercy. But that mercy does not manifest itself by way of gentleness and tenderness in all circumstances.

Out of pure mercy, like an expert physician, it sometimes administers a sweet draught to us and at other times it prescribes a bitter medicine for us. Divine mercy deals with us as each of us deals mercifully with his body. There can be no doubt that each of us loves his whole body and if anyone wishes to pull out a single hair of ours we are much annoyed with him. Yet despite the fact that the love that we bear towards our body is distributed over the whole of it, and all our limbs are dear to us, and we do not desire the loss or hurt to any of them, it is clear that our love for every one of our limbs is not of the same degree and quality. In fact, the love of our principal limbs upon which largely depends the carrying out of our purposes, prevails over our hearts. Similarly, in our estimation the totality of our limbs is far greater than our love for any particular limb. Thus, when we are confronted with a situation in which the security of a superior limb depends upon wounding or cutting or breaking an inferior limb, we reconcile ourselves to such an operation. We are grieved at the wounding or cutting of a limb that is dear to us, but through the apprehension lest the disorder of the inferior limb should operate to destroy a superior limb, we are reluctantly reconciled to its cutting. This illustration should help us to realise that when God observes that His righteous servants are in peril of being destroyed at the hands of the worshippers of falsehood and that this would lead to great disorder, He manifests His appropriate design, whether from heaven or from earth, for the safeguarding of the righteous and for the putting down of disorder; for as He is Merciful, He is also Wise.

All praise belongs to Allah, the Lord of the Universe. 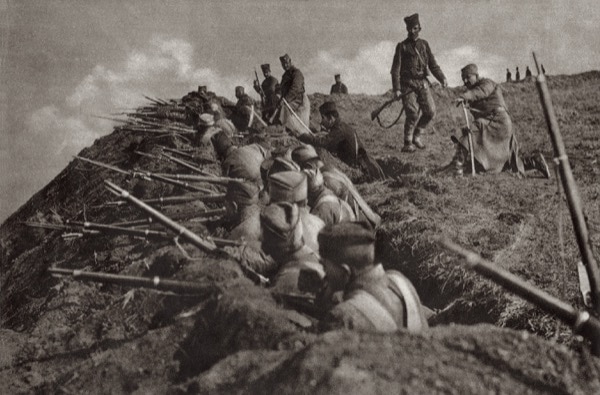 World War One – Centenary of the Fulfilment of a Great Warning

The Holy War
A Prophecy of the Promised Messiah (as)
Comment