The Holy Qur’an, regarding the creation of man, states:

‘And I have not created the Jinn and the men but that they may worship Me.’[1]

Considering this verse of the Holy Qur’an, we learn that the purpose of man’s creation is to establish the worship of God. Man has been created with numerous faculties, which suggest his role and purpose as being far more significant than merely residing in this transient world. Rather, it is to establish a true and strong relationship with his Creator in this world and in the hereafter. Therefore, the places most adored and loved by Allah are those that are supportive and helpful in achieving this purpose; namely mosques. The Holy Prophetsa laid great importance on the building of mosques and stated, ‘Of all the buildings, the most beautiful and attractive in Allah’s Sight is a Mosque.’[2]

Regarding the first ever mosque built for the worship of God Almighty, the Ka’aba in Makkah, God Almighty states:

‘Surely, the first house founded for mankind is that at Becca (Makkah), abounding in blessings and a guidance for peoples.’[3]

Further alluding on this subject, Hazrat Mirza Bashir-ud-Din Mahmud Ahmadra, Second Successor to the Promised Messiahas and Second Worldwide Head of the Ahmadiyya Muslim Community, states in his commentary of the Holy Qur’an:

“When Abraham offered this prayer, there was no town next to the Ka’aba. There existed only the House of God. So Abraham prayed that in the wildest of wilderness there might grow a town and that that town might become a place of security, affording peace to mankind. In fulfilment of this prayer, the town of Makkah evolved there and has remained a place of peace and security for thousands of years. The prayer also implied that the Baitullah[4] would be the means of bringing peace and security to mankind. Firstly, those who accepted Islam were to become secure from all evils and the recipients of God’s Blessings. Secondly, Islam was to be the means of bringing about peace and concord among different nations of the world.”[5]

Therefore, mosques are a source of great divine grace and blessings. They form an integral part of society and serve the whole community, irrespective of one’s faith. Hazrat Khalifatul Masih IVra regarding this verse of the Holy Qur’an states:

“Allah has here used the expression ‘mankind’ which indicates that this House was constructed for neither the Muslims, nor Hindus, nor Christians, but for the whole of mankind, for carrying out the worship of Allah. It was intended that here would in due course, be born the Prophetsa through whom the whole of mankind would be gathered together under the banner of one faith.”[6]

From the early history of Islam, we learn that mosques not only functioned as buildings for the worship and remembrance of God, but that they have served a number of functions for the general welfare of mankind; as meeting places, for social gatherings, as centres of learning, for respite and even for essential water supplies (a prerequisite for Salat[7] is to perform ablution and water is always amply available in mosques for worshippers). It is a symbol that expresses the unity of God and projects peace and harmony.

Regarding the importance of building mosques, the Founder of the Ahmadiyya Muslim Community –Hazrat Mirza Ghulam Ahmadas stated, ‘If you want Islam to progress, build a mosque. Wherever our Community is established, a mosque should be built….’[8] Indeed, mosques become the beacons of projecting peace and harmony and illuminating their surroundings with their spiritual light. At the occasion of the Inauguration of the Darul Aman Mosque in Friedberg, Germany, Hazrat Mirza Masroor Ahmadaba, Fifth Successor to the Promised Messiahas and the current Head of the Ahmadiyya Muslim Community stated, ‘Indeed, this Mosque does not just guarantee peace to those who enter it, but it will also prove to be a source of peace for all members of the local community, no matter whether they are religious or not.’[9]

The Ahmadiyya Muslim Community under the divine leadership of its spiritual leader, gives the building and constructing of mosques its due importance. Consequently, the Community has opened over ten thousand mosques to date around the world. These mosques are built in order to provide a place of worship for Muslims to submit in humility to God and as centres to spread the true and peaceful teachings of Islam with love.

Hazrat Mirza Masroor Ahmadaba, has personally inaugurated numerous mosques built by the Ahmadiyya Muslim Community all around the world in countries such as the UK, Spain, Canada, America, Australia and New Zealand. The inaugurations of the mosques are marked with a special event in which local dignitaries, academics, professionals, journalists and also local residents and neighbours are invited. His Holinessexpounds on the pure and pristine teachings of Islam and the true purpose of building mosques in Islam. On one such occasion His Holinesssaid:

‘‘And I would like to inform you that the status of the mosque as a place of refuge is not limited only to those who enter it, but in wider terms it means that even those who live in the surrounding areas will always be safe and will never have any reason to fear the worshippers of the Mosque. Not only will the local people be able to live safely and peacefully, but they will also find that every Ahmadi Muslim will stand shoulder to shoulder with them in an effort to establish a society filled with peace, love and compassion. Certainly, the local people of this area will find that all Ahmadis will always remain at the forefront of every effort that is made towards transforming hatred and enmity into love and peace.’’[10]

Today, mosques are often stereotyped as the breeding ground for extremism and terrorism and are perceived to be isolated from the general community. However, at the Inauguration of the newly built Nasir Mosque in Gillingham, UK, His Holiness said regarding the role of a mosque:

‘‘Thus it will be a place for people to gather in an effort to help the poor, to help orphans and to free people from every type of slavery once and for all. It will be a place for them to join together to serve humanity and benefit mankind and it will also be a place to fulfil the rights of the Mosque’s neighbours and to help them. In regard to the rights owed to one’s neighbours, I would like to clarify that according to the teachings of Islam a person’s neighbours have a great value and status.’’[11]

Thus, the Ahmadiyya mosques play a vital social role wherever they are constructed. This is because Ahmadi Muslims have been instructed by the Founder of the Ahmadiyya Community to extend an affectionate hand of friendship to all those around them. Many Ahmadi mosques and their adjoining halls are utilised by local communities for schools, police public training sessions, blood drives, inter-faith conferences and community events etc.

The efforts of the Ahmadiyya Community to establish peace and harmony through the building of mosques has been recognised and appreciated by many.

In his recent tour to the Far East (Singapore, Australia, New Zealand & Japan) His Holiness inaugurated a number of mosques. The opening of these mosques has had a tremendous impact in dispelling the misconceptions about Islam as an extremist religion, through their peaceful and harmonious interaction with the wider community. At the Inauguration of the Masroor Mosque in Brisbane, Australia, State MP Michael Pucci said:

“What an honour to have His Holiness, Hazrat Mirza Masroor Ahmad here in Logan. The Ahmadiyya Muslim Community is a major part of our Community. Ahmadis are terrific ambassadors not just for their faith but also for our Community. I am proud to have this Mosque in my constituency.”[12]

Recently His Holiness inaugurated the Nasir Mosque in Gillingham, in the southern county of Kent, in England. Mr. Rob Price, Assistant Chief Constable of Kent Police, expressing his views said:

“I get a real sense of excitement actually that the mosque can be that catalyst for better community relations.  So, I think that because of the mosque, our community will get only stronger. I am very excited about the prospect.”[13]

At the Inauguration of Baitur Rahman Mosque in Valencia, Spain, Her Excellency Mari Carmen Contelles Llopis, the Lady Mayor of Pobla de Vallbona, the town where the new mosque is located, said she was delighted to welcome so many guests to her town. She praised the Ahmadiyya Muslim Community for ‘always promoting peace and tolerance in the world.’[14]

At the opening of Baitur Rahman Mosque in Vancouver, Canada, a guest expressed his feelings in the following words:

Since the establishment of the Community in Berlin, Germany, in 1923 it has opened forty mosques and it continues to build towards the accomplishment of this great and noble task. In June 2014, the current head of the Ahmadiyya Muslim Community attended the 39th Annual Convention in Germany (called Jalsa Salana). During the visit, His Holiness laid the foundation for two mosques; and inaugurated Sadiq and Mubarak Mosques in Karben and Wiedbaden, the Darul Amaan Mosque and Al Mahdi Mosque in Friedberg and Munich, Germany. During his visit to the various mosques, His Holinesscontinued to remind members of the Community and the public of the spirit and the significance behind establishing these mosques.

Speaking about the new mosque Hazrat Mirza Masroor Ahmadaba said, ‘When this Mosque is built you will come to witness that true Mosques are not a place to spread evil or hatred, but rather serve only to spread peace, love and unity throughout the world.’[17] He also stated:

“This mosque has been called the ‘Mosque of the Truthful’ and so the qualities of truth, honesty and integrity must be visible in every word and every act of an Ahmadi Muslim. Indeed, when the Mosque is complete the local people will come to see that Ahmadis practice what they preach and spread truth in all directions.”[18]

Mosques built by the Ahmadiyya Muslim Community all over the world continue to stand as an abode of peace and tranquillity. Its’ domes and minarets not only represent a magnificent history of Islam, but act as beacons from which the message of love, respect and harmony echoes forth to the hearts of many.

7.  Formal way of worship in Islam.

12.  Hazrat Mirza Masroor Ahmadaba, “Mosque – An Abode of Peace & Compassion at the inauguration of a new mosque in Brisbane,” Review of Religions, http://reviewreligion.wpengine.com/10424/mosque-an-abode-of-peace-compassion/.

14. Abdul Majid Tahir, “Re-Emergence of Islam in Spain Through a Peaceful Message”, Review of Religions, http://reviewreligion.wpengine.com/9143/re-emergence-of-islam-in-spain-through-a-peaceful-message/.

The Fulda Mosque – A source of Peace, Education & Religious Tolerance 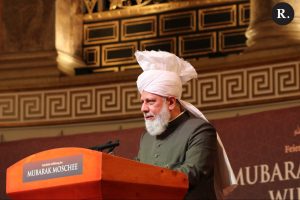 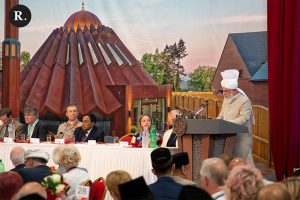 The 23 Great Objectives of the House of Allah
Snapshot: Ahmadiyya Mosque Activities in Germany
Comment