HIS HOLINESS, WORLDWIDE HEAD OF THE AHMADIYYA MUSLIM COMMUNITY, LAUNCHES NEW SPANISH EDITION OF THE REVIEW OF RELIGIONS IN GUATEMALA, CENTRAL AMERICA WITH A POTENTIAL AUDIENCE OF 400 MILLION

Over 6000ft above sea level in the stunning natural beauty of Guatemala, not far from where are volcanoes, rainforests and ancient Mayan sites, an incredible moment of history was created. This was a moment with the momentum to have a ripple effect to potentially over 400 million people across the world. All it required was the simple press of one button. However, it was so much more than just that!

His Holiness, Hazrat Mirza Masroor Ahmad, Worldwide Head of the Ahmadiyya Muslim Community, 5th Khalifah (Caliph or Successor) of the Promised Messiah (as) came to the beautiful country of Guatemala for his first ever visit to Central America, to inaugurate the Nasir Hospital in Sacatepequez. This stunning hospital was made by Humanity First, an international charity started by the 4th Caliph of the Ahmadiyya Muslim Community, Hazrat Mirza Tahir Ahmad (rh). This itself was a remarkable achievement and one that The Review of Religions has and will be covering extensively across our various platforms. Here, at the end of the hospital inauguration, His Holiness arrived in the press conference marquee to establish yet another milestone in the history of the Ahmadiyya Muslim Community.

For, with the press of the red button on an iPad, His Holiness had launched the new Spanish edition of The Review of Religions – the magazine initiated by Hazrat Mirza Ghulam Ahmad (as), whose claim was to being the Promised Messiah and Imam Mahdi, the Promised Reformer and Guided One whose advent had been prophesied by all major religions in the latter days. The online version of Spanish edition of The Review of Religions is now available at http://es.reviewofreligions.org.

How did the Spanish Edition Come About?

Last week His Holiness, Hazrat Mirza Masroor Ahmad (aba) delivered a Friday Sermon from Philadelphia at the inauguration of the first purpose built mosque in the ‘city of brotherly love’. Philadelphia is the city where the Declaration of Independence and Constitution of the United States were signed. In the historic Friday Sermon, His Holiness mentioned an intriguing detail. The first Ahmadi Muslim convert in the city of Philadelphia, Dr. Baker, learned of Islam Ahmadiyyat after reading The Review of Religions. Later His Holiness visited the recently discovered grave of Dr. Baker located a 6 minute drive from the new mosque and offered a silent prayer, where this writer had the honour to be also present at the time.

There are many other examples of how The Review of Religions pioneered missionary and outreach efforts to spread the message of true Islam in different parts of the world.

10th June 2018. This date will forever remain an important date for the Spanish speaking world. The Review of Religions team from various departments had the honour of an audience with His Holiness. Foreign edition teams were also present. During this meeting His Holiness set out a revolutionary blue print for the future of this esteemed publication. He explained to us how to gear content for Africa, how to use social media effectively, how to approach contemporary issues and how to conduct academic research amongst many other gems of guidance.

You will have to have a Spanish edition in the future as there are 40 million people in Spain and more than 400 million in USA and South America who speak Spanish.

Later I had the honour of a private audience with His Holiness where further guidance was given. Tarik Ata from Cordoba, Spain was appointed as chief editor of the new Spanish edition. Marisa Isabel Losa Serna, originally from Spain but now living in the UK, was appointed as deputy editor. Faiz Ahmad, who lives in Guatemala, was appointed as the Latin American coordinator.

His Holiness had a clear vision for the Spanish edition and we were blessed and humbled to witness that vision coming to fruition.

The Launch of the Spanish Edition in Guatemala

His Holiness decided that he would launch the Spanish edition in Guatemala at the inauguration of the Nasir Hospital by Humanity first. His Holiness said the first edition should all be based on service to humanity based on Islam to give a direct link to the hospital opening. The new Spanish The Review of Religions team worked closely with the central The Review of Religions content, design and IT teams to produce the first print edition of The Review of Religions, website and Facebook page. It was a huge undertaking to complete in a very a short space of time, much credit must go to our dedicated staff who worked day and night to make this possible. We also received great help from Humanity First whose support we are obliged to commend in helping us obtain content and photos for this first edition and giving us access to the hospital weeks before to conduct interviews.

Thereafter, I along with the new editor and deputy editor of the Spanish team were granted the honour of an audience with His Holiness. The print edition and website had been completed. And so we asked His Holiness about launching the new Spanish edition in Guatemala . He said:

Tarik Ata, the new chief editor of the Spanish edition told me:

‘The fact that the Spanish edition of The Review of Religions has been launched by His Holiness in his first visit to Central America is certainly a blessing for all the Spanish speaking world. God Willing, this milestone will mark the beginning of a scheme that will help significantly promoting the true teachings of Islam in the Hispanic world and as His Holiness mentioned to us before the launch, fulfil the vision the Promised Messiah had for this magazine’.

Above Tarik Ata is referring to a question he and Marisa Losa asked His Holiness during our private audience. They asked His Holiness, Your Holiness, what is your vision for the Spanish edition of The Review of Religions? His Holiness replied, My vision is exactly the same as the vision of the Promised Messiah for this magazine and to further that.

‘As a Spanish convert, it is an amazing news to now have available in Spanish this blessed magazine established by the Promised Messiah, the Reformer of this Age. Undoubtedly this will benefit many people around the globe by bringing the true teachings of Islam. It will help to remove many of the existing misconceptions about Islam in many Spanish speaking countries. I feel privileged to work and be part of this extraordinary project and serve our Khalifah (Caliph), serve Islam and help further this blessed task, now, to all the Spanish world.’

His Holiness after arriving in Guatemala would regularly ask about the launch of the Spanish edition. One evening prior to the launch, His Holiness visited the Ahmadiyya Muslim Community’s Baitul Awwal mosque in Guatemala. A large delegation from South American countries were blessed with a sitting with His Holiness in the mosque. Marisa Losa was sitting at the back and His Holiness at one point spoke to her and asked her in detail about the work she had been doing since she arrived.

When His Holiness arrived into the press marquee within the Nasir Hospital after delivering a historic address, we had prepared a small area for His Holiness to press the launch button, initiating the new Spanish edition website. Marisa Losa also handed His Holiness a gift-wrapped first Spanish edition. Tarik Ata and Faiz Ahmad were also at hand.

As His Holiness reached near to the iPad and then was about to press the button, I could hear him reciting a prayer in a low voice. That in itself was a very spiritual moment and put into context the task ahead.

Finally, the button was pressed, and the Spanish edition officially launched.

God only knows what the future entails, but this is certainly the start of something special and historic. This was the vision of His Holiness, Hazrat Mirza Masroor Ahmad (aba), Worldwide Head of the Ahmadiyya Muslim Community to reach out further to the Spanish speaking world and further the aims of Hazrat Mirza Ghulam Ahmad, the Promised Messiah and Imam Mahdi (as).

TagsROR - 'The Review of Religions' 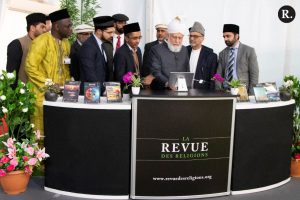 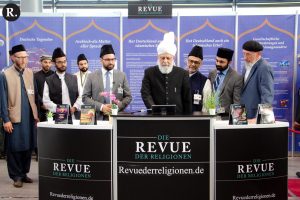 Launch of German Edition of The Review of Religions

Mosques – Centres of Love & Peace
A Beacon of Peace
Comment