The death toll from the Covid-19 pandemic continues to rise throughout the world. More than two and a half million people have lost their lives in just one year due to this deadly illness. [1] Neither East nor West is safe from the ill effects of this disease. The UK passed the grim milestone of 125,000 deaths. The President of the USA held a service of remembrance to mark the sad milestone of more than half a million deaths. The death toll in India is more than 150,000; in Africa, it is more than 10,000, and in Iran, it has exceeded 60,000. With death in the news every day of the week, it makes one wonder what death actually means? What is the religious perspective on death and how does the soul fit in the story of human life and death? In this article, we will reflect on the religious perspective on death and how the soul is viewed from a religious and especially an Islamic perspective.

The Concept of Death

The Encyclopaedia Britannica has defined death as ‘The permanent cessation of the vital functions in the bodies of animals and plants.’ [2] In religious terms, death is the permanent separation of the soul from the physical body. Various groups of faith have a firm belief that during human life, the soul is an essential part of the body and leaves the body permanently at the time of death. According to the Cambridge dictionary, ‘Soul is the spiritual part of a person that some people believe continues to exist in some form after their body has died.‘ [3]

Allah the Exalted says in the Holy Qur’an, ‘Allah takes away the souls of human beings at the time of their death; and during their sleep of those also that are not yet dead. And then He retains those against which He has decreed death, and sends back the others till an appointed term. In that surely are Signs for a people who reflect.’ [4] Explaining the process of death, the fourth Head of the Ahmadiyya Muslim Community, Hazrat Khalifatul Masih IV (rh) said, ‘When the soul parts from the body, the body chemistry immediately begins to decay and returns to its constituent substances with no more sense left in the body at all.’ [5]

Religious Concept of the Soul

Hinduism, one of the oldest religions in the world, and other Indus Valley religions such as Jainism and Buddhism, believe that souls are eternal, uncreated and everlasting. The soul is granted a physical body during life. At the time of death, the soul leaves that physical body and later has a rebirth in another physical body; the concept of reincarnation. For them, the body is a prison for the soul. [6]

Abrahamic faiths believe that God is the creator of the soul and that it is not eternal. The soul leaves its physical body at the time of death, never to return to another body. The Torah says, ‘And the Lord God formed man of the dust of the ground, and breathed into his nostrils the breath of life; and man became a living soul‘. [7] According to the beliefs in Judaism, the soul has its first attachment to the body from the moment of conception and remains with it until the moment of death. Death is thus often referred to in Hebrew as ‘departure of the soul‘. [8] According to Christian teachings, ‘The spiritual world is the realm of God, and as living souls, we are spiritual beings. Therefore, the moment we are not living in the physical world, we will be living in the spiritual world with God.’ [9] ‘The spirit shall return unto God who gave it.’ [10] Allah the Exalted says in the Holy Qur’an’: ‘And they ask thee concerning the soul. Say, ‘The soul is created by the command of my Lord; and of the knowledge thereof you have been given but a little’. [11]

The Islamic concept of the Soul

Islam has provided information about the existence of the soul and has explained that a complete understanding of all aspects of the human soul may be beyond the power of human comprehension. This has been eloquently explained by the Reformer of our age, the Promised Messiah (as), Hazrat Mirza Ghulam Ahmad of Qadian. The Promised Messiah (as) said, ‘Unlike the Vedas, the Qur’an says that the souls are not uncreated but that they come into existence along with the body. [12] Muslims believe that the soul is created within the body as the Promised Messiah (as) says, ‘The truth is that the soul is developed in the body and this also proves that it is created and is not self-existent. [13] ‘Then We clothed the bones with flesh; then We developed it into another creation. So blessed be Allah, the Best of creators.’ [14]

Explaining the refined concept of soul, the Promised Messiah (as) said, ‘It is absolutely true that the soul is a fine light developed inside the body and which is nurtured in the womb. To begin with it is hidden and imperceptible and later it is made manifest. From the very beginning its essence is present in the sperm.’ [15]

Expounding on the origin of the soul, the Promised Messiah (as) says, ‘There is conclusive evidence that the male and female sperm have the capacity to generate the soul without its falling from heaven like the dew. When the two sperms unite the capacity is strengthened and grows till when the frame-work of the embryo is ready the soul is activated from the framework by the power of God Almighty. This is the creation of something from non-existence, because the soul is not anything material and yet it is generated from the same matter which grows into a framework after the union of the two sperms in the womb. It is not necessary that the soul should fall like dew on some vegetable and should be generated in this manner.’ [16]

The Soul after Death

The Holy Qur’an says, ‘Then after that you must surely die. Then on the Day of Resurrection will you be raised up.’ [17] Mr B A Orchard wrote the following in one of his articles about the soul, ‘The soul is a conscious entity and the Holy Qur’an tells us in many places that in the new life after death it will remember details of its life in this world.’ [18]

According to Islam, in the case of humans, when life ends, the body dies, but not the soul. What then happens to the soul at the time of death? The soul leaves its earthly body and takes on a new spiritual body representing the actions of this life. The Holy Qur’an also shows that the souls of the righteous and elect of God are recalled from death after some days, some after three days, some after a week, and others after 40 days after death. This new life of theirs is a life of extreme bliss, sweetness, and enjoyment. [19]

In the Muslim world, traditions have taken place for special prayers on the 3rd, 10th and 40th day after death. These traditions were not recorded during the lifetime of the Holy Prophet (sa). These traditions do not actually have any influence on the bearing of the deceased with the grave, as it has been said that the souls of highly spiritual people and martyrs are recalled immediately after death.

Expounding on the soul after death, the founder of the Ahmadiyya Muslim Community, the Promised Messiah (as), Hazrat Mirza Ghulam Ahmad of Qadian, writes in his book Chashma-i-Ma’rifat, ‘As the body undergoes a death by decomposition and decay, similarly, the soul under-goes a death when it loses its qualities. But those who lose themselves in God are again raised to life, as they had attained a union with God, and because their lives adumbrated or were shadows of Divine life. The unclean souls are also given a sense so that they may be subjected to chastisement, but they are neither among the dead nor among the living. They are, like the man who is suffering from an excruciating pain, his condition is as bad as death and the whole earth and heavens grow dark in his eyes.’ [20]

‘And give glad tidings to those who believe and do good works, that for them are Gardens beneath which flow streams.’ [21] ‘The Messiah of the time explained about the progress of the soul after death in his book Chashma-i-Ma’rifat, ‘The Holy Qur’an indicates that the changes of the soul are unlimited and will continue even in heaven. They will be indicative of progress and the souls will experience a continuous growth, each succeeding condition will be so far above the preceding condition that it would seem as if the preceding condition had died.’ [22]

Though the soul departs the physical body at the time of death, its connection to the physical body is not severed immediately and completely. Malik Jamil R Rafiq wrote in his article about the Islamic perspective on life after death, published in The Review of Religions in 2014, ‘As the soul had been dwelling in the material body for several years, so after death it remembers it and maintains a connection with it for some time. This does not suggest that the soul remains in the body of the deceased for that period. Not at all. For, at death, it immediately reaches its destination in heaven. With the passage of time, this connection weakens and ultimately ceases to exist. It is like the link of a person with his native land who emigrates to some distant country forever. He continues remembering his native land for a certain period of time, then slowly this attachment diminishes and no longer exists.’ [23]

Islam accepts death as the perfect inevitability, as Allah the Exalted says in the Holy Qur’an, ‘All that is on it (earth) will pass away’. [24] Throughout the world, various rituals are practised to express the sorrow and grief of the bereaved and to convey their respect for the deceased. But at times, these established ways of expressing grief are threatened. During natural and man-made disasters, long-held and well-practised traditions of various religions and cultures to say farewell to loved ones may become impractical. In recent years, epidemics like SARS-1, EBOLA and now COVID-19, have impacted the way goodbyes are said and practised. The rituals or goodbye ceremonies are limited in line with the necessary restrictions implemented. Some communities have considered this as a violation of human rights, but Muslims are advised to express their sorrow by seeking solace with their Creator; ‘Surely, to Allah we belong and to Him shall we return.’ [25]

About the Author: Dr Amtul Shafee Sami is a specialist surgeon. She has an interest in research and has been published in peer-reviewed medical journals. She is part of IBRANet, a national research group of breast surgeons. Dr Amtul Shafee Sami is a serving member of the editorial board of The Review of Religions. She also serves as the president of Ahmadiyya Women’s auxiliary organisation for the Yorkshire region branch of the UK. 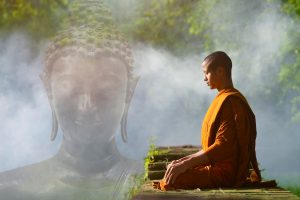 Fasting in the Buddhist Faith: An Interview with Gen Kelsang Leksang

Fasting in the Jewish Faith: An Interview with Rabbi Dr Margaret Jacobi

Fasting in the Catholic Faith – An Interview with Andy Lewis