Mirza Masroor Ahmad (aba), Caliph of the Worldwide Ahmadiyya Muslim Community is truly the kindest, most caring person I know.

This is natural of course, because as the Caliph appointed by God, a successor to a Prophet, and the person with the closest connection to God today, Mirza Masroor Ahmad (aba) is yet another manifestation of:

‘Say, “We will adopt the religion of Allah”’

‘This indeed is the true baptism which can make one acquire God’s attributes and become His living manifestation.’

A Reflection of God’s Attributes

Let’s take just a few examples of God’s attributes; the Source of Peace, the Loving, the Beneficent, the Compassionate. Unequivocally, there is no person on the face of the earth today, who represents these attributes in a greater fashion than His Holiness, Mirza Masroor Ahmad (aba), Caliph of the Ahmadiyya Muslim Community.

How do I know this?

It’s because millions around the world can bear testament to this fact, not only because they’ve heard about if from someone else, but because they’ve seen and experienced the majesty of this holy personage of the Caliph, whether near or far, for themselves.

As the Caliph, Mirza Masroor Ahmad (aba) himself explains:

‘There is no personal or Jama’at [community] matter of any Ahmadi around the world which is not in view of the Caliph of the time, and not only does he practically strive to resolve these matters, but he also bows down before Allah the Almighty and prays to Him. I, along with the Caliphs before me, have all done this.’

Experiencing the Love, Care and Compassion of the Caliph

God’s grace is unmatched, for I am one among the millions of fortunate souls who has personally witnessed the astounding compassion, love and sincere concern of the Caliph, and thereby seen a reflection and manifestation of the attributes of God.

After graduating from the Ahmadiyya Institute of Languages and Theology in Canada, I, along with the rest of the graduating class of 2019 was blessed with the opportunity of spending some time in the proximity of the Caliph (aba). During this time, my classmates were given an assignment by the Caliph which they had to submit directly to him. I was assigned to work under The Review of Religions, and thus was instructed that the assignment given to the rest of my classmates did not apply to me.

On our last day in the UK, we were blessed to meet the Caliph on an individual basis. As my classmates met the Caliph, he returned each of their assignments, upon which he had written some guidance for each of them by his own blessed hand.

Afterward, we were all standing outside, elatedly sharing stories of what our beloved Caliph had said to each of us, and my classmates shared the written gems they had received from the Caliph. Then, someone came rushing out of the office, saying that the Caliph was summoning me back to his office.

It was a shocking moment for me, and I was sure that this person had mistakenly said my name, and it was someone who the Caliph had summoned. He assured me however, that it was me who the Caliph wanted to see.

I hurried back inside, and in the whirlwind of it all, I found myself standing in the luminous presence of my beloved Imam once again. What happened next was so surreal, it’s still difficult to fathom.

‘I wrote some guidance for everyone else on the papers they had submitted, but you did not get anything.’

I was left utterly astonished. In my happiness just to have met the Caliph (aba), it had not even occurred to me that I was the only one not to receive written guidance from the Caliph. Yet, even though the thought had not crossed my mind, it had crossed the mind of our beloved Caliph. Despite being the busiest man on earth, he wanted to make sure that I didn’t feel left out in way.

The Caliph then asked:

‘What shall I give you?’

What could I possibly say? The Caliph has already given me more than I could ever have asked for; guidance, inspiration, love, compassion. Through his being, he has shown me that there truly is a living God, and that I can experience Him for myself. Yet, the Caliph was asking what more he could give. I could not find the words to answer this loving question from my beloved Caliph.

He looked around on his desk and then asked,

I replied saying that I would of course be content with whatever the Caliph (aba) gave me. He then opened the book and started writing something in it. Then the Caliph (aba) looked at another book on his desk and said with a smile,

‘Shall I give you another book as well?’

At this point I was at a complete loss, I could not believe the immense blessings, love and compassion I was experiencing in that moment. He opened the second book and wrote something in it as well and then handed both books to me.

The books were titled, Ten Proofs for the Existence of God, and Signs of the Living God. How fitting indeed, because just in that moment, I truly experienced the undeniable existence of God, and how God alone can enable someone such as His chosen Caliph to be so loving, caring and compassionate.

When I stepped outside the office, I opened the books to find that the Caliph had written in English:

It just so happened, that the Caliph wrote these words right above the following quote printed in one of the book:

‘God speaks today, just as He did before.’ 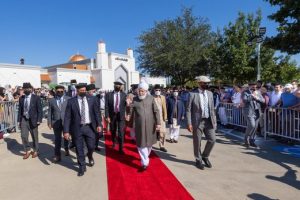