On receiving the good news the Holy Prophet Muhammad (sa) would immediately prostrate and offer a sajdah [prostrations] of gratitude.

Hazrat Sa‘d bin Abi Waqqas (ra) relates that we were returning to Madinah from Makkah. When we reached a place [called] Azwara, The Holy Prophet (sa) dismounted, he raised his hands and prayed for a while, then went into prostration. He stayed in prostration for a very long time. He then stood up, raised his hands in prayer and went into prostration again. He did this three times and then told us, ‘I prayed for my ummah [people]. God gave me permission to intercede on behalf of one third of my ummah. I prostrated in gratitude. When I prayed again, God granted me permission of intercession for another third of my ummah. I prostrated in gratitude. Then I raised my head and prayed again and God gave me permission for intercession on behalf of the remaining third of my ummah and I prostrated to offer gratitude.’

Hazrat ‘Abdur Rahman bin ‘Auf (ra) relates, ‘The Holy Prophet Muhammad (sa) came into the mosque and facing Ka‘bah performed sajdah. He remained in sajdah for such a long time that we became worried in case God had taken possession of his soul. I went near him, he got up and enquired as to who was there. I told him my name. The Holy Prophet (sa) asked me as to what the matter was. I told him, “O Messenger (sa) of Allah, you were in sajdah for such a long time that we feared lest God had taken possession of your soul.” The Holy Prophet Muhammad (sa) replied, “Gabriel came to me and conveyed me the glad tidings of God’s decree that whosoever will invoke blessings and peace on me, God will bestow peace upon him.” On hearing this I offered sajdah of thanks to God.’

At the time of his greatest success, victory over Makkah, he was sitting on his she-camel with his head bowed so low that it was touching the saddle. He was bowing in gratitude and praying, ‘O Allah! Holy are You with all the praise and attributes, O Allah, forgive my sins. O Allah forgive me.’ 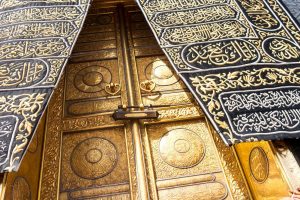