It started off with something as simple as a morning stroll.

As the sun began its late-afternoon dive into her orange-purple hues, an equally impressive influx of guests started to occupy the red carpet laid out in honor of His Holiness, the Caliph and Worldwide Head of The Ahmadiyya Muslim Community. The invitees on this august occasion ranged from members of public service, military, professors, scholars, dignitaries, religious and non-religious friends of the community alike.

They were filing in (some from across the country) to witness the Inaugural Address of His Holiness for the “Grand Victory Mosque”. The hustle and bustle quickly became its own proverbial red carpet for the historic evening ahead.

The excitement and anticipation was as apparent on faces as it was palpable in the air.

While representatives of the Ahmadiyya Muslim Community from as far off as Germany, Africa and the Middle East were welcoming various guests, the diversity of the guests themselves spoke volumes about the open minds and good hearts in attendance.

You never know on these exciting occasions which exchange might become a conversation, and what conversation you end up taking with you for a life time. I shuffled passed the numerous warm smiles, “hellos,” and “how-are-yous” offering greetings of peace, until I came to a familiar face: Dr. Craig Considine.

I asked him how his stay had been so far. He took out his phone.

“I went on the most amazing walk this morning. The most wonderful walk. I think I may have walked for many miles until I came to this beach. It was just this unintended and awesome experience!”

I smiled as the student-hood of the professor shined through his eyes.

As he swiped through the pictures of his morning stroll, his student-of-life attitude was reminiscent of what we had always been taught as young Ahmadi boys. As the Holy Prophet Muhammad (saw) famously said, “Seek knowledge from the cradle to the grave.” I couldn’t help but think about how child-like wonder for the truths of the world was a fading phenomenon.

Fading, but not lost.

After all, here was a Christian Professor who lived by the Bible and followed Jesus Christ (as), yet did not hesitate to publicly admire the Prophet Muhammad (saw).

The day before, he had told me how excited he was to be granted an audience with His Holiness, Hazrat Mirza Masroor Ahmad, The Caliph and Worldwide Head of The Ahmadiyya Muslim Community. I congratulated the professor in advance and we promised to reconvene after his one-on-one with the Caliph, scheduled for right before the Zion Mosque Inauguration.

The sunset gave way to a chilly moonlit night by the end of His Holiness’ inaugural address. As soon as we finished our dinner, I caught up with Dr. Considine to ask him about his experience.

His table was situated relatively close to where His Holiness sat. On our way out of the tent, we both took a moment to stand respectfully on the side and just look at the Caliph. As an Ahmadi Muslim and a firm believer in Khilafat, I take every opportunity to steal a heartfelt glance at my Beloved Khalifa.

But when I looked over at the professor, I saw the look of admiration and sincere love that so many friends of the Community have when looking at His Holiness. Of course, we weren’t alone. A quick scan of the sea of faces in the tent revealed countless others watching His Holiness as he spoke smilingly and with deep interest to those seated nearest him.

We left to find a quieter place for the interview.

‘So tell me, Doctor: what did you honestly think about His Holiness’ historic address on Zion & Alexander Dowie?’

‘I feel like the story just keeps on getting bigger and growing and growing,’ the Professor began.

‘All these details. And we kind of lost the point of the big picture, and the true lesson.

‘He [i.e His Holiness] did a really good job of just keeping it simple and making it about things that any human being can understand. I really appreciated that.

‘I liked the emphasis that he put on respect, and all of these other fundamental things about being human. Respect, tolerance, dignity, honor. And at a bigger level, he’s really pointing us towards love, and when we were one-on-one, we were talking about love.’

The Professor was referring to a special meeting he had enjoyed with His Holiness even before the dinner. He was one of the fortunate guests with whom His Holiness had spoken one-on-one. It had been a heart-warming meeting filled to the brim with genuine love. Video clips from the meeting are now available all over social media and continue to garner views and retweets.

His Holiness began their meeting by telling the Professor that the Public Affairs Secretary had wanted to introduce Dr Craig to him. ‘I told [the Secretary] “If I don’t know the Professor then nobody knows him.”’

‘I’m honoured, Your Holiness,’ Dr Considine replied. Near the end of the fascinating exchange, the Caliph remarked:

So naturally, I had to ask the Professor what the esteemed audience with His Holiness had been like for him.

‘The meeting was incredible. We talked about a lot of different things, from nuclear war all the way down to the importance of food. That’s the moment that really connected with me, is when I made him smile, and I made him laugh, because I think I was speaking his language, which is a simple language.

I just said “you know, Your Holiness, we’re talking about respect and love, those two things and how they interact. But you can’t have love without respect. Respect comes first.”

And one way of showing respect to people is by being a host. [You say] “come over to my place and I’ll make you food, I’ll take care of you, just sit down, enjoy yourself.” And I think he understands the importance of that.

He continued: ‘I was telling His Holiness my thoughts on love as well. To get to love, it’s not easy. It takes so much consideration, time, and effort to even get to that point. Without respect you can’t even go up any level.

You know they say “unconditional love,” [but it’s] also about unconditional respect. Even if you’ve blasphemed, even if you said something wildly outrageous, there’s still got to be enough tolerance for no condemnation to happen.

Now that’s not to say we’re not going to say “Hey, listen, we need to talk to you about what you just said. Let’s talk about that for a second.”’

By this time, His Holiness had made his way near the exit of the tent that had hosted the night’s event. Surrounded by various guests, he was now visible to us both. We turned to look at him as we continued.

I decided to ask a deeper question.

‘Doctor, we as Ahmadi Muslims believe that this individual (The Caliph) is the representative of the Prophet of Islam, the Holy Prophet Muhammad (sa) in the world today. I’d like to ask you very frankly: to what extent do you see the colors of the founder of Islam embodied in the Caliph of Ahmadiyyat today?’

‘In many ways, they’re mirror images in terms of the character of conduct and the actions. That’s what, for me, is most important about my connection with the Ahmadiyya Movement. It’s not the theology, it’s not the religion. It’s what people do with their resources.

The ability to serve humanity unconditionally, that’s what Prophet Muhammad did. I always say he was engaging in “Tikun Olam” which is the ancient Hebrew phrase of “to heal a fractured world.”

The Prophet Muhammad was bringing the periphery back into the fold, saying “I understand that these people have been neglected and forgotten, but they’re God’s children. Bring them back into the fold”. And you see a lot of that unconditional openness in the Ahmadiyya Muslim Community.

There’s of course other things. Prophet Muhammad hosts the Christians of Najran in 630, being a great host for 3 days. Simple things about this story are really important. It didn’t end on the first day, they kept going. This [Najrani] Christian Community was willing to discuss their faith and the Muslim Community allowed them to speak it.

This is another great thing about my own experience with the Ahmadiyya Muslim community. I can openly talk about my faith. I never feel like a heretic here, which is great because there’s a lot of condemnation all around.

I love the inquisitive nature of it.

The curious nature of the Ahmadiyya Movement to figure out the ultimate questions of who we are. Deep conversations with folks.

It gets pretty deep sometimes.’

We watched in silence as His Holiness left the tent and walked a few feet away from us, proceeding to another tent to engage with some volunteers who had been working hard.

‘Where’s he going now?’ The Professor asked me. I explained that His Holiness made it a point to personally take stock of the various aspects of the administrative and logistical upkeep of  the community’s events.

As we waited for His Holiness to proceed toward the mosque for prayers, I asked the Professor:

‘We were chatting earlier about your amazing walk this morning, how you started this day with it. Now you’re ending it with a meeting and then dinner with His Holiness. This huge event. What are your overall feelings about coming here?’

He breathed deeply as though taking it all in again.

‘Uplifting. Rewarding. Honored.’ He now spoke with his eyes down, reflecting.

There’s just a lot of general goodness, and I feel like I’m a better person for having been here. I always feel that way. Let’s say I spend a weekend with the Ahmadiyya Muslim Community somewhere. You always walk away feeling better about the state of your existence, and of your life.

Let me put it this way: I would love if someone said about me and my family “I just spent three days with this person and I feel like I’m a better person for having spent time”. That’s what I also want to be in the world.

And this is what I really appreciated about this dynamic that His Holiness and I had going on where I really felt like I was family almost, you know.’

I replied, ‘you are family, Doctor.’

For me that’s like spiritually fulfilling. He roots you down. That’s why I’ve always felt like there’s this ambience in his presence.’

As Dr Considine said these words, His Holiness finished speaking to some Arab guests and proceeded to walk right passed us.

‘Where’s he going now?’ the Professor asked me in a respectfully hushed voice.

‘He’s proceeding to the Ultimate Meeting,’ I replied in a whisper.

About the Author: Sabahat Ali is an imam of the Ahmadiyya Muslim Community in Silicon Valley, USA. He serves as a member of the editorial board and is also editor of The Existence Project for The Review of Religions. 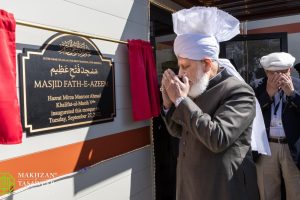