‘And, if my enemy should throw me into a raging fire,

You will find me safe and the enemy shall perish’[1]

One of the major signs for the truthfulness of a Prophet is the divine assistance he is given. Allah grants him superiority over his opponents in every aspect and establishes his truthfulness. Regarding the greatest miracle, which is the Holy Qur’an and was given to the greatest Prophet (sa), Allah states:

‘Do they say, ‘He has forged it?’ Say, ‘Then bring ten Chapters like it, forged, and call on whom you can beside Allah, if you are truthful.’ And if they do not respond to you, then know that it has been revealed replete with Allah’s knowledge and that there is no God but He. Will you then submit?’[2]

This miracle will remain inimitable till the day of Judgment. The opponents will never bring the likeness of the Qur’an, which is one of the greatest signs for the truthfulness of Islam. As we know, this age is the age of the pen and many allegations have been raised against the religion of Islam. Allah the Almighty bestowed upon The Promised Messiah and founder of the Ahmadiyya Muslim Community, Hazrat Mirza Ghulam Ahmad (as) the blessed opportunity of being at the forefront for the defense of Islam. Regarding this, Hazrat Mirza Ghulam Ahmad (as) writes in his poetry:

‘We routed the ranks of foes with convincing proofs; The work of sword we accomplished with just the pen.’[3]

The Holy Prophet Muhammad (sa) had already prophesised regarding the miraculous literature of the latter day Messiah. He stated:

‘He will distribute wealth and nobody will accept it’[4]

Regarding this sign, Hazrat Mirza Ghulam Ahmad (as) writes:

In fulfillment of this prophecy, Allah the Almighty sent the Messiah of this age with his own literary miracle, which was to be subordinate to the Qur’an and as a miracle for the truth of Islam. The Promised Messiah (as) wrote books such as I`jaz-e-Ahmadi and I`jazul Masih and challenged all his opponents to respond. They of course were unable to respond to him and remained silent.

‘Now, if, within the twenty days’ time, which will expire in the evening of 10 December 1902, they will have published their response to the qasidah and the related Urdu essay, you may rest assured that I am absolutely ruined and destroyed and all my enterprise is rendered null and void. With an outcome like this, my entire community should abandon me and cut their ties with me.

Still, if my opponents intentionally stay away from this competition, they will not only deprive themselves of the cash prize worth 10,000 rupees, they will also continue to partake of the ten curses invoked against them’[7]

Regarding this miracle, he wrote:

It was not possible for anyone to respond to this miracle. Hazrat Mirza Ghulam Ahmad (as) wrote:

‘I was shown a cheering dream on Tuesday night when I had supplicated the Divine that He should make my commentary a miracle for the scholars and that none of them should have the power to compile the like of it, nor should they have the strength to write anything in competition with it. On that blessed night, my prayer found acceptance from the Presence of the Great One and my Lord cheered me saying:

‘He has been forbidden by the Forbidder from heaven’

Then I understood that the indication was that my opponents would not have the power to attempt it and that they would not be able to produce the like of it either in eloquence or in its qualities. This good news was given by Allah the Most Benevolent, during the last ten days of Ramadan.’[9]

‘I had received a revelation relating to my book I’jazul Masih:

Meaning ‘He who, being incensed, sets out to write a reply, will soon find that he is filled with remorse and has come to a sorry end’’[10]

A person named Muhammad Hasan Faizi from the village Bheen was planning to respond to this miracle. Hazrat Mirza Ghulam Ahmad (as) mentions the fulfillment of the prophecy in the following words:

‘One Muhammad Hasan Faizi of village Bheen, Tahsil Chakwal, District Jhelum, a teacher in the Madrassah Nu‘maniah in the Shahi [Royal] Mosque Lahore, made a public announcement that he would write a reply to my book. After making such a tall claim, when he started compiling his notes and with reference to some of the verities that I had set out in my book he called down the curse of Allah upon liars, he perished soon thereafter. Observe how, having called down a curse upon me, he died an accursed death within a week.’[11]

Hazrat Mirza Ghulam Ahmad (as) was given eloquence and mastery in Arabic which could not be matched, by even the greatest Arab scholars of his time. He writes:

‘I have been given the sign of eloquence and mastery in Arabic, as a reflection of the Quranic miracle of eloquence, and no one can challenge me on this.’[12]

How could the opponents respond to this challenge of Hazrat Mirza Ghulam Ahmad (as), when Allah the Almighty taught him 40,000 words in a single night. Regarding this, he wrote:

‘My proficiency in Arabic, despite a lack of effort and research, is a sign from God Almighty, so that my intellect and literary prowess becomes manifest to people. Thus, can anyone from among the opponents object to it? Moreover, I have been taught 40,000 words of the Arabic language. Despite the fact that I am sick most of the time and I enjoy very few days of health, I have been given vast and complete knowledge in the literary sciences and this has happened only through the blessings of my God.’[13]

‘All of what I have said, of my perfection and my eloquence in my speech, then that is after the Book of Allah, the Qur’an’[14]

As for setting a time limit, this does not diminish the grandeur of the miracle in anyway whatsoever. Hazrat Imam Ghazali (ra) wrote:

[4] Sahih al-Bukhari, Book of Oppressions, Chapter: The Breaking of the Cross and Killing of the Pigs, Hadith #2476 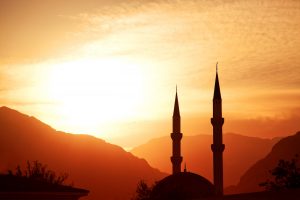 Jesus, the ‘Son of God’ – The Historical Context
The Messiah Has Come: True Prophets Are Always Victorious Over Their Opponents
Comment